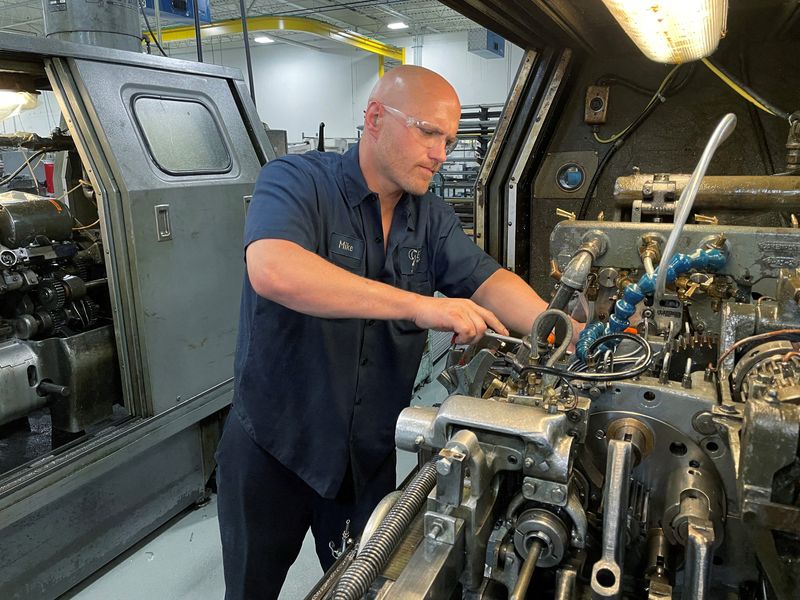 WASHINGTON (Reuters) – A measure of U.S. manufacturing activity fell to a 14-month low in January amid an outbreak of COVID-19 cases, supporting the view that economic growth lost steam at the start of the year.

But the survey from the Institute for Supply Management (ISM) on Tuesday marked the third straight month of signs of improvements in labor and supplier delivery performance. Unfinished work increased at its slowest pace in 15 months and manufacturers remained upbeat on demand.

“While off to a somewhat rocky start, 2022 will be a good year for U.S. manufacturing,” said Oren Klachkin, lead U.S. economist at Oxford Economics in New York.

The ISM’s index of national factory activity dropped to a reading of 57.6 last month, the lowest since November 2020, from 58.8 in December. A reading above 50 indicates expansion in manufacturing, which accounts for 11.9% of the U.S. economy.

Economists polled by Reuters had forecast the index would drop to 57.5. All of the six biggest manufacturing industries – machinery, food, transportation equipment, computer and electronic products, chemical products, and petroleum and coal products reported moderate to strong growth.

The economy hit a soft patch in December which appeared to have persisted in early 2022 as coronavirus infections, driven by the Omicron variant, surged across the country. The ensuing disruptions at businesses and schools have led economists to anticipate a sharp slowdown in job growth in January.

Makers of chemical products reported “massive interruptions to our production due to supplier COVID-19 problems limiting their manufacturing of key raw materials like steel cans and chemicals.” Similar sentiments were echoed by their counterparts in the fabricated metal products industry.

But makers of nonmetallic mineral products are seeing light at the end of the tunnel, reporting that “the supply chain crunch may be loosening a bit.”

Stocks on Wall Street were trading largely flat. The dollar slipped versus a basket of currencies. Prices of longer-dated U.S. Treasuries fell.

The economy grew at a 6.9% annualized rate in the fourth quarter, helping to boost overall growth in 2021 to 5.7%, the strongest performance since 1984. Economists at Goldman Sachs (NYSE:) on Monday slashed their first-quarter gross domestic product growth estimate to a 0.5% rate from a 2.0% pace, citing Omicron and reduced government payments to households.

The ISM survey’s forward-looking new orders sub-index fell to 57.9 last month, the lowest reading since June 2020, from 61.0 in December. It was the second straight monthly slowdown in new orders. But customer inventories remain depressed, which could limit the pace of moderation in orders growth.

The replenishing of inventories will likely underpin manufacturing and sustain the economic expansion.

A measure of order backlogs tumbled to 56.4%, the lowest since October 2020, from 62.8% in December, pointing to some easing in supply bottlenecks. That was reinforced by a gauge of supplier deliveries, which was little changed at 64.6. A reading above 50% indicates slower deliveries to factories.

Still, prices at the factory gate marched higher. The survey’s measure of prices paid by manufacturers increased to a reading of 76.1 from 68.2 in December, suggesting that inflation could remain uncomfortably high for a while.

The Federal Reserve last week said it was likely to raise interest rates in March, with economists expecting as many as seven hikes this year to tame inflation.

The rise in factory employment is welcome amid fears of a possible decline in nonfarm payrolls in January.

According to a Reuters survey of economists, nonfarm payrolls likely increased by 150,000 jobs last month after rising by 199,000 in December. Estimates range from a drop of 400,000 jobs to an increase of 385,000. The Labor Department is scheduled to publish January’s employment report on Friday.

But worker shortages remain an obstacle. A separate report from the Labor Department on Tuesday showed job openings increased 150,000 to 10.9 million at the end of December, close to the all-time high of 11.098 million reached in July.

The nearly broad rise was led by accommodation and food services, which reported an additional 133,000 job openings. Layoffs hit a record low.

“It seems clear from these data that the labor market got even tighter at the end of December than was apparent in the December payroll data,” said Conrad DeQuadros, senior economic advisor at Brean Capital in New York. “These data suggest that any signs of weakness in job growth in January would not represent a weakening in labor demand.”