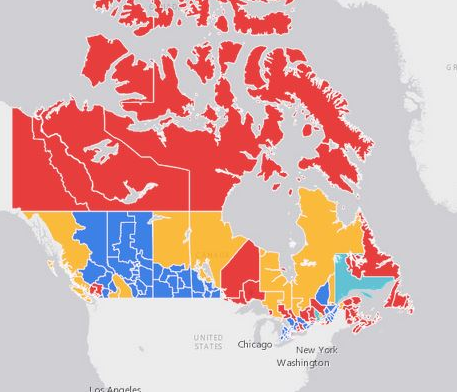 Canadians are still voting on the west coast but polls are closed on the Atlantic coast of Canada and that means voting results are coming in..

The rule of thumb is that Liberals do better in the east and Conservatives in the west but there are a dozen caveats to that. The Liberals’ strongest area of support is generally the east coast and that’s what we’re seeing in the earliest results, which show Liberals leading in 17 ridings, Conservatives ahead in 5 and the NDP leading in 1.

One interesting early result in Newfoundland is the riding of Coast of Bays-Central-Notre Dame. About 15% of the vote is in and the tally is:

In the previous election in 2019, the final tally was:

Again, we don’t know which polls are reporting and where they are in the riding but it’s not the greatest sign for Trudeau.