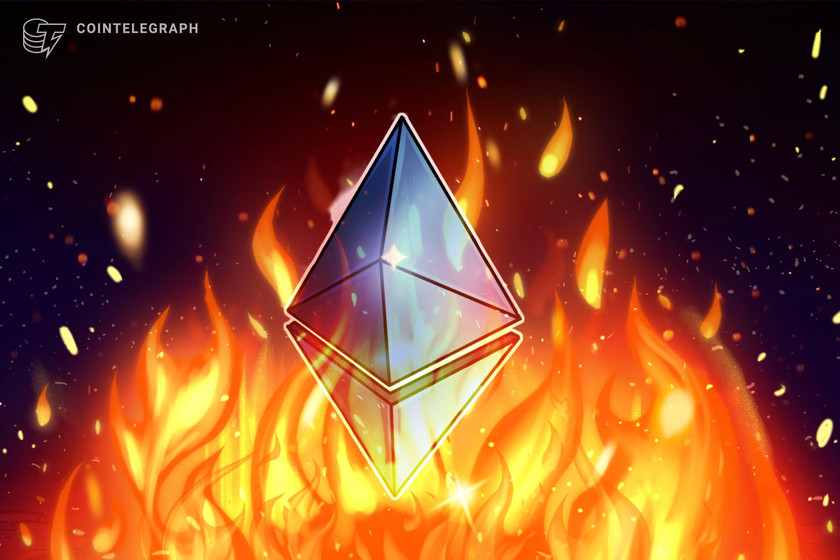 In a Twitter post published Wednesday, blockchain research firm CryptoRank revealed that over 1 million Ether (ETH) (worth $4.24 billion) had been burned since the introduction of the EIP-1559 protocol in August as part of the London hard fork. The EIP-1559 protocol reformed the Ethereum fee market, modifying the limit for gas fees and introducing a burn feature that takes a portion of transaction fees on the blockchain out of circulation, to be canceled permanently.

Notable decentralized applications responsible for token burn contributions include popular nonfungible tokens, or NFTs, platform OpenSea.io and play-to-earn NFTs game Axie Infinity. Next, transaction volume from decentralized exchanges such as Uniswap, 1inch, and Sushiswap made up a large portion of ETH burns. ETH is also burned during transfers from stablecoins like Tether (USDT) and USD Coin (USDC) built on the Ethereum blockchain. Lastly, wallet users in MetaMask and those making regular ETH transactions also contributed to the network activity.

@Ethereum transaction fee-burning mechanism has removed 1M #ETH from the network’s circulation since it came into effect.

That’s all about to change next year when the Ethereum 2.0 upgrade goes live, transitioning the network from a proof-of-work consensus to that of proof-of-stake, where staking rewards will be far lower than mining rewards. As a result, it would lower the blockchain’s emission rate far below its burn rate, thereby creating a deflationary ecosystem. Ultra Sound Money projects the peak supply of ETH will hit 119.7 million in early 2022 before beginning to decline.