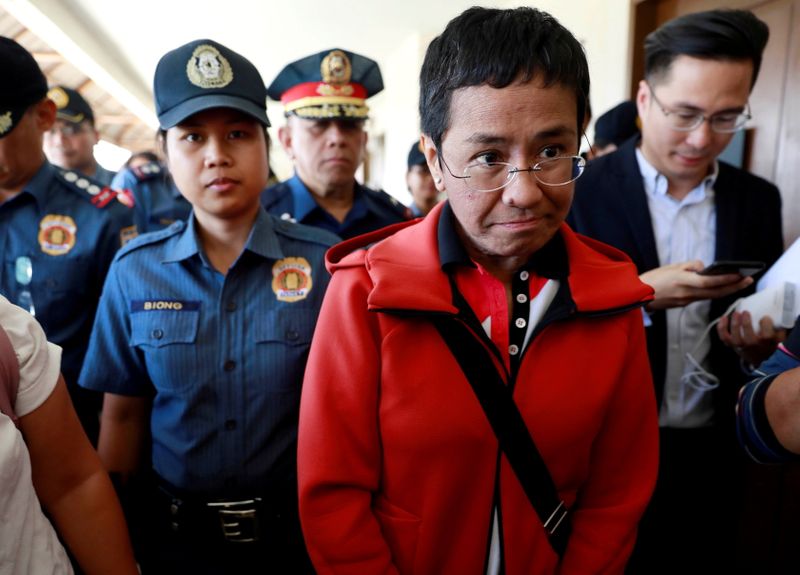 MANILA (Reuters) -Nobel Peace Prize winner Maria Ressa used her new prominence to criticise Facebook (NASDAQ:) as a threat to democracy, saying the social media giant fails to protect against the spread of hate and disinformation and is “biased against facts”.

The veteran journalist and head of Philippine news site Rappler told Reuters in an interview after winning the award that Facebook’s algorithms “prioritise the spread of lies laced with anger and hate over facts.”

Her comments add to the pile of recent pressure on Facebook, used by more than 3 billion people, which a former employee turned whistleblower https://www.reuters.com/technology/facebook-whistleblower-reveals-identity-ahead-senate-hearing-2021-10-03 accused of putting profit over the need to curb hate speech and misinformation. Facebook denies any wrongdoing.

Sought for comment on Ressa’s remarks, a Facebook spokesperson said the social media giant continues to invest heavily to remove and reduce the visibility of harmful content.

“We believe in press freedom and support news organisations and journalists around the world as they continue their important work,” the spokesperson added.

Ressa has been the target of intense social-media hatred campaigns from President Rodrigo Duterte’s supporters, which she said were aimed at destroying her and Rappler’s credibility.

ELECTION ‘A BATTLE FOR FACTS’

“These online attacks on social media have a purpose, they are targeted, they are used like a weapon,” said the former CNN journalist.

Rappler’s reporting has included close scrutiny of Duterte’s deadly war on drugs https://www.reuters.com/investigates/section/philippines-drugs and a series of investigative reports into what it says is his government’s strategy to “weaponise” the internet, using bloggers on its payroll to stir up anger among online supporters who threaten and discredit Duterte’s critics.

Duterte has not commented on Ressa’s award. The presidential palace, Duterte’s spokesperson, his chief legal counsel, and communications office did not respond to Reuters requests for comment.

Facebook in March 2019 removed an online network in the Philippines for “coordinated inauthentic behaviour https://www.reuters.com/article/uk-facebook-fake-accounts-idUKKCN1RA0CL”, and linked it to a businessman who has previously said he helped manage the president’s social media election campaign in 2016.

Filipinos top the world https://datareportal.com/reports/digital-2021-global-overview-report in time spent on social media, according to 2021 studies by social media management firms.

Platforms like Facebook have become political battlegrounds and have helped strengthen Duterte’s support base, having been instrumental in his election victory in 2016 and a rout by his allies in mid-term polls last year.

The Philippines will hold an election in May to choose a successor to Duterte https://www.reuters.com/world/asia-pacific/contenders-philippines-2022-presidential-race-2021-09-30, who under the constitution is not allowed to seek another term.

That campaign “will be a battle for facts,” Ressa said. “We are going to keep making sure our public sees the facts, understands it. We are not going to be harassed or intimidated into silence.”