Gold prices climbed from 6-week lows to start the week, with the metal gaining 0.63% on Monday as a broad wave of risk aversion bolstered gold’s appeal. One of China’s largest real estate funds, the Evergrande Group, is facing a potential default on a series of debt payments. Those defaults may upend the entire Chinese housing market, which poses systemic market risks.

Investors moved to price in those risks on Monday when the US stock market saw a sharp selloff. The Dow Jones Industrial Average (DJIA) closed 1.78% lower on Monday. Traders rushed into Treasuries and other government bonds in lieu of equities. The benchmark 10-year note’s yield dropped by the most since August 13.

The benefits of Monday’s risk-off move to the yellow metal were twofold. The first being gold’s safe-haven appeal. Traditionally, gold has been viewed as a store of value, which appeals to traders during adverse economic events. The second is the correlation with bond yields. The move lower in Treasury yields – also caused by safe-haven flows – reduced the opportunity cost of holding the non-interest-bearing metal.

That said, gold’s fundamental appeal is in a strong stance given the current market conditions. Should China’s Evergrande Group and its potential debt defaults continue to roil global markets, it stands to benefit prices further. There is speculation that Beijing may step in this week and announce a rescue package for the Evergrande Group. That would likely go a long way in restoring market confidence, but it would also likely hurt gold prices.

The Federal Reserve presents another variable for prices this week. Wednesday, the FOMC rate decision will cross the wires, with Fed Chair Powell’s testimony directly after. It is widely expected that rates will remain unchanged. However, a potential announcement on scaling back asset purchases is in focus for investors.

Fed Chair Powell may hint at a timeline on tapering balance sheet purchases, but a formal announcement isn’t seen until November, according to a Bloomberg survey. Should a tangible taper signal come Wednesday, it would likely weigh on XAU/USD, given the potential downward pressure on bond prices. Balance sheet tapering is seen as somewhat of a prelude to rate hikes.

Iron ore is up nearly 3% in Singapore Tuesday. However, prices remain near the lowest levels traded since October 2020 after three weeks of back-to-back losses. The worsening Covid situation, driven by the Delta strain, has weighed on economic recovery hopes in recent months. Moreover, steelmaking restrictions across China are sapping demand as Beijing moves to curb emissions and rising commodity prices. China has reportedly tightened restrictions across several provinces in recent weeks.

China is the world’s leading steelmaker, which gives the country an outsized influence on iron ore fundamentals. The Evergrande situation is only adding to iron ore’s woes, with major potential implications for the metal ingredient should the Chinese housing market collapse. For now, the fundamental outlook for iron ore doesn’t offer much upside. That said, prices may see some upside on a relief rally considering the immense drop seen already, but there isn’t much hope for any substantial recovery at the current moment.

Gold prices rose to a trendline that previously posed as channel resistance. While no longer a valid channel, the trendline appears to be offering a degree of resistance to prices. If prices turn lower, the 38.2% Fibonacci retracement from the July/August move may step in as support. Alternatively, a break higher may see resistance at the 61.8% Fib level. A move above that would see traders shift focus to the falling 200-day Simple Moving Average (SMA). 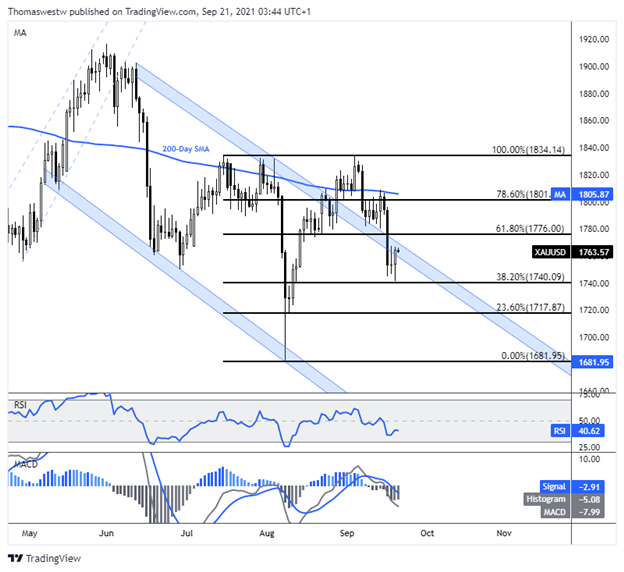