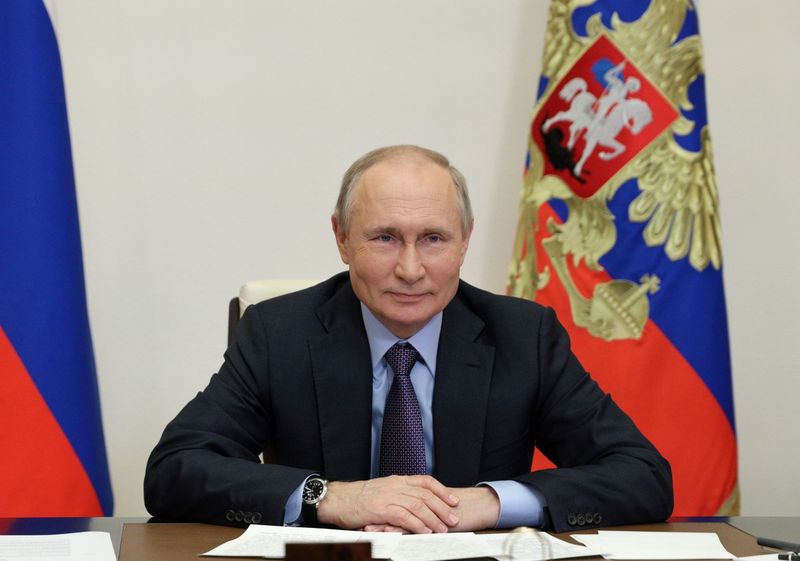 By Katya Golubkova and Tom Balmforth

MOSCOW (Reuters) – President Vladimir Putin said on Saturday that Belarus had not consulted him before raising the possibility of cutting Russian flows to Europe, adding that such a move would risk harming ties between Minsk and its key ally Moscow.

Belarusian President Alexander Lukashenko threatened on Thursday to retaliate against any new European Union sanctions against Minsk over a migrant standoff on the Belarus-EU border, suggesting he could halt the transit of gas and other goods via Belarus.

His warning briefly lifted spot gas prices in Europe, which gets about a third of its supplies of the fuel from Russia, including via the Yamal-Europe pipeline that runs through Belarus to Poland and Germany.

The Belarusian section of the Yamal-Europe pipeline is owned by Russia’s state gas monopoly, Gazprom (MCX:).

“I’ve recently spoken to (Lukashenko) twice and he didn’t mention this to me once, he didn’t even hint,” Putin said in a state television interview, making his first public comments about the Belarusian threat.

“Of course, in theory, Lukashenko as president of a transit country could order our (gas) supplies to be cut to Europe. But this would mean a breach of our gas transit contract and I hope this will not happen,” Putin added.

Russia has been Belarus’s closest ally for years, helping with everything from cash to cheap energy supplies and military assistance, but Lukashenko’s comments come at a sensitive time for Russia’s energy exports to Europe.

European gas prices – and therefore, energy bills – are on the rise this year as the recovery from the pandemic has triggered a spike in demand, forcing customers from Europe to Asia to fight for supplies.

Some European politicians have accused Moscow of failing to do more than just send contractual gas volumes, in order to calm down prices.

The European Commission said on Friday that if Lukashenko made good on his threats, it would further harm gas suppliers.

During Saturday’s interview, Putin said that if Belarus did cut off supplies, it would “cause great damage” to the European energy sector “and would not help in developing our relations with Belarus as a transit country”.

“I will raise this with him (Lukashenko) in case this wasn’t something (he) said in the heat of the moment,” Putin said.

Russia, which this week started to increase supplies to refill its European storage ahead of the winter heating season, has said more could come once its newly built Nord Stream 2 pipeline gets a green light from Germany.

Nord Stream 2 is another Russian pipeline designed to bypass transit countries, particularly Ukraine, which has a history of gas pricing standoffs with Moscow.

The Kremlin calls the pipeline a “purely commercial project” and denies that politics are behind it in any way.