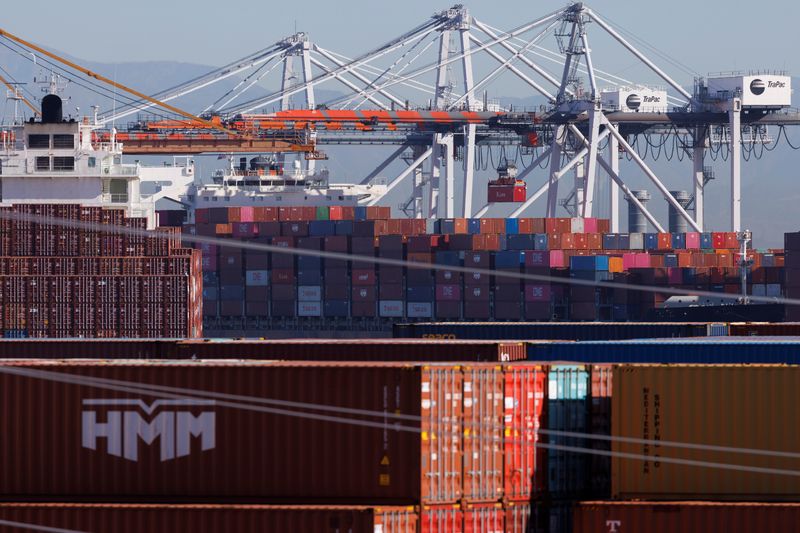 WASHINGTON (Reuters) – The U.S. trade deficit widened to a record high in January as businesses imported more goods to rebuild inventories, potentially setting up trade to remain a drag on economic growth in the first quarter.

Though inventory accumulation continues, the pace is cooling, with other data from the Commerce Department on Tuesday showing the increase in wholesale inventories in January was the smallest in six months amid a decline in motor vehicle stocks.

The reports support views of significantly slower gross domestic product growth this quarter after a robust performance in the final three months of 2021.

“This jump in the trade deficit points to a large drag on GDP growth in accounting terms and real GDP growth in the first quarter looks on track to be close to zero as strong demand gains are met by import growth rather than production increases,” said Conrad DeQuadros, senior economist at Brean Capital in New York.

The trade deficit surged 9.4% to an all-time high of $89.7 billion in January. Data for December was revised to show a $82.0 billion shortfall instead of the previously reported $80.7 billion. Economists polled by Reuters had forecast an $87.1 billion deficit.

Imports increased 1.2% to $314.1 billion, also the highest on record. Goods imports surged 1.8% to an all-time high of $264.8 billion. There were record-high imports of food, capital and consumer goods. Crude oil imports increased by $935 million.

Non-petroleum imports were also the highest on record. Imports are rising as businesses continue to replenish inventories to meet strong domestic demand.

Some of the rise in imports reflected higher prices as well as ships offloading goods after being held up at ports because of worker shortages. Imports of services fell $1.0 billion to $49.3 billion in January, pulled down by transport and travel.

Economists saw a limited impact on trade from Russia’s war on Ukraine, which has resulted in the United States imposing trade sanctions on Moscow.

Russia accounted for only 1% of imports and about 0.4% of exports last year, according to government data.

President Joe Biden on Tuesday announced a ban on Russian oil and other energy imports, which will push up prices and further fuel inflation. According to government data, the nation imported 52 million barrels of oil from Russia in 2019, accounting for 2.2% of the total imported that year. Data for 2020 and 2022 was impacted by the COVID-19 pandemic.

“The share from Russia may seem like a drop in the bucket, but Russia is still the fourth-largest foreign source of for the U.S.,” said Shannon Seery, an economist at Wells Fargo (NYSE:) in New York. “With the relatively easy ability to ramp up production domestically the direct U.S. exposure should be fairly minimal. That said, the protest against Russian oil is sure to weigh on global supply and drive up energy costs even more than we’ve already seen.”

In January, exports fell 1.7% to $224.4 billion. Goods exports decreased 1.5% to $155.9 billion. There was a decline in exports of consumer goods, including pharmaceutical preparations. But capital goods exports increased and exports of industrial supplies and materials were the highest on record.

Exports of services dropped $1.6 billion to $68.5 billion, reflecting decreases in travel and transportation. The Russia-Ukraine war could curb travel.

Adjusted for inflation, the goods trade deficit shot up to a record $118.1 billion from $111.7 billion in December. Trade has subtracted from GDP growth for six straight quarters.

“Exports could bounce back somewhat over the remainder of the quarter, but even so, we think that the trade drag could be around 2 percentage points for the first quarter,” said Daniel Silver, an economist at JPMorgan (NYSE:) in New York.

Inventories are a key part of gross domestic product.

But inventories are likely to be neutral to GDP growth this quarter as they would need to increase at a similarly fast rate as the fourth quarter to contribute to growth. In the wake of Tuesday’s reports, economists at Goldman Sachs (NYSE:) lowered their first-quarter GDP growth estimate to a 1.0% rate from a 1.5% pace.

Sales at wholesalers shot up 4.0% in January after rising 0.8% in December. At January’s sales pace it would take wholesalers 1.20 months to clear shelves, down from 1.24 months in December. Inventories were drawn down for three straight quarters before rebounding in the October-December period.