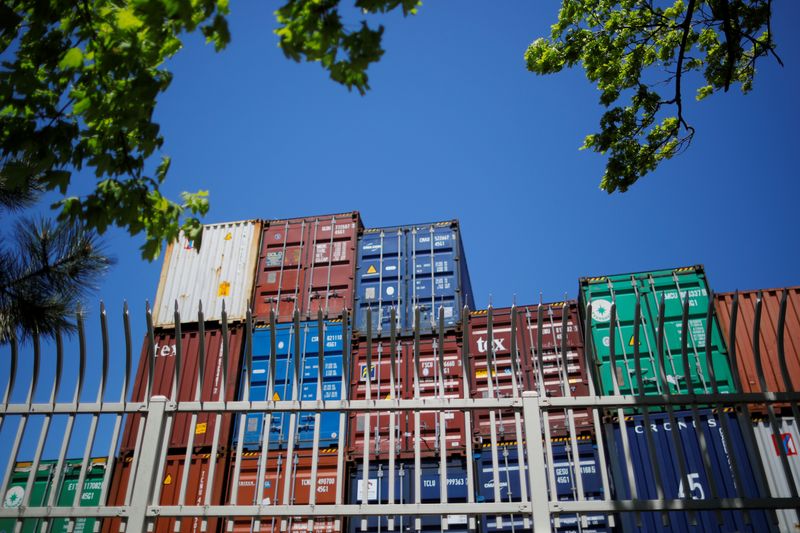 © Reuters. FILE PHOTO – Shipping containers, including one labelled “China Shipping” and another “Italia”, are stacked at the Paul W. Conley Container Terminal in Boston, Massachusetts, U.S., May 9, 2018. REUTERS/Brian Snyder

WASHINGTON (Reuters) – The U.S. trade deficit surged to a record high in 2021 as imports increased sharply amid the restocking of shelves by businesses to meet robust domestic demand.

The sharp widening in the trade gap reported by the Commerce Department on Tuesday mostly reflected a shift in spending toward goods from services during the COVID-19 pandemic. With businesses eager to rebuild depleted inventories against the backdrop of stretched global supply chains, the deficit is unlikely to shrink much this year, cutting into economic growth.

“The need to replenish inventory in the United States will keep imports strong even as domestic demand transitions back to services,” said Tim Quinlan, a senior economist at Wells Fargo (NYSE:) in Charlotte, North Carolina. “Eventually as domestic demand begins to slow and the global recovery continues, we expect trade to become more of a neutral force on growth next year.”

The trade gap represented 3.7% of gross domestic product, up from 3.2% in 2020. The deficit subtracted 1.39 percentage points from GDP growth last year.

The economy grew 5.7% in 2021, the strongest since 1984, after the government provided nearly $6 trillion in pandemic relief, which fueled consumer spending on goods.

They were driven by imports of industrial supplies and materials, which increased to their highest level since 2014.

Food imports were the highest on record as were those of capital, consumer and other goods. There were record imports from 70 countries in 2021, led by Mexico, Canada and Germany.

Robust import growth overshadowed a sharp rebound in exports. Goods exports surged 23.3% to a record $1.8 trillion. Exports of industrial supplies and materials, foods, consumer goods, other goods and petroleum were the highest on record.

During the administration of former president Donald Trump, China pledged to buy more goods from the United States. However, it missed its targets under the “Phase 1” trade deal signed in January 2020 to halt escalation of a tariff war on Chinese goods launched by Trump in 2018. The purchases commitments expired at the end of 2021.

“The goods imported from China would create a lot of jobs if the country could produce it here, but with American wages soaring out of sight, it is unlikely that U.S. manufacturers will restart their factories here especially for consumer goods where margins are tight,” said Christopher Rupkey, chief economist at FWDBONDS in New York.

In a final boost to the trade gap for the year, the shortfall in December increased 1.8% from the prior month to $80.7 billion. Economists polled by Reuters had forecast an $83.0 billion deficit in December.

The smaller-than-expected widening in the deficit reflected a $1.4 billion increase in exports of services, which were boosted by travel and transportation. It suggested that the government could raise its fourth-quarter GDP growth estimate, when it publishes its first revision later this month.

Trade made no contribution to last quarter’s 6.9% annualized GDP growth rate. It had subtracted from growth for five straight quarters.

The goods trade deficit rose 3.2% to $101.4 billion in December, marking a record high. December imports of goods surged 2.0% to an all-time high of $259.7 billion. There were record highs set for imports of capital and consumer goods.

Some of the rise in imports likely reflected goods being offloaded after being delayed for months aboard ships at U.S. ports because of worker shortages. Port backlogs remain high, which suggests goods imports could set another record high in January. Prior to the pandemic, imports tended to peak ahead of the holiday shopping season, tapering off by the first quarter.

“But growth of imports will slow over the rest of 2022,” said Bill Adams, chief economist at Comerica (NYSE:) Bank.

“Businesses are making progress rebuilding inventories, and real consumer spending on durable goods is forecast to fall in 2022. That will mean less demand for imported consumer products as the year goes on.”

Goods exports rose 1.3% to $158.3 billion in December. In addition to the strong growth in services exports, shipments of consumer goods were the highest on record.

“The world economy is coming around, as Omicron starts to burn itself out and restrictions are eased,” said Joel Naroff, chief economist at Naroff Economics in Holland, Pennsylvania. “That is the good news. The bad news is that the U.S. continues to ship its recovery out to the rest of the world.”