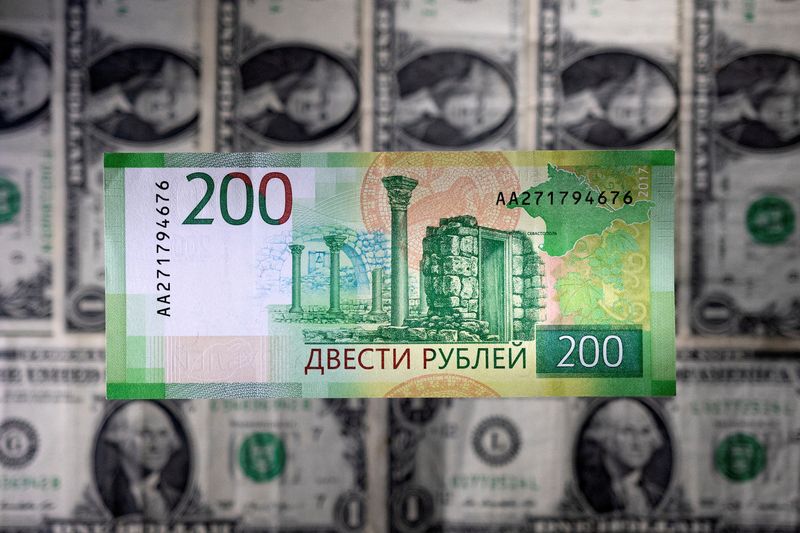 (Reuters) -The rouble ended the week down more than 20% against the dollar and euro in Moscow trading on Friday and dropped a third of its value on other platforms this week as the country’s economy buckles under the pressure of sanctions meant to isolate Russia in response to its invasion of Ukraine.

Thousands of people are believed to have been killed or wounded and more than 1 million refugees have fled Ukraine since the Feb. 24 start of the Russian invasion.

The rouble ended the week at 105 per dollar from 83 last Friday in Moscow, though it strengthened 1% on the session from its Thursday close. Against the euro, it closed just below 119 from 93 last week.

It hit a record low against the dollar on Thursday, and the euro on Friday.

On the EBS platform, the rouble closed down 12.9% on the day against the dollar at 124, for a decline of 32% this week alone, the most for any week on records back to 2007. The bid-ask spread was very wide throughout the day in what traders called a sign of evaporating liquidity.

Dmitry Polevoy, investment director at Locko Invest, cautioned that the sanctions imposed on Russia over the Ukraine invasion – which Moscow says is not designed to occupy territory – would lead to an economic shock of a magnitude not seen in a long time.

Russia five-year credit defaults swaps – a measure of the cost of insuring exposure to its debt – stood at 1,565 basis points (bps), up from Thursday’s 1,412 bps close but still some way away from the record close of 1,973 on Monday, data from IHS Markit showed.

Moscow stock trading remained closed and bonds showed wide bid-ask spreads in little to no volume, as they did for most of the week.

In a move to try to stabilise wildly fluctuating markets, the Moscow Exchange imposed a ban on short selling of euro currency and stock instruments.

Citing a deterioration in borrowing conditions, the finance ministry paused issuance of OFZ treasury bonds for households. There were roughly 39 billion roubles ($343.5 million) of the retail investments outstanding as of Jan. 1.