Russia has pledged to stand its ground against what it calls “hostile actions” but has accepted that its economy will take a significant hit from the extensive sanctions imposed by the west in response to its invasion of Ukraine.

Economists expect the sanctions to push Russia into a deep recession while driving inflation even higher this year, but do not think the economy will fail to function as long as the political will in the Kremlin exists to soften the impact of the measures.

Danny Glaser, former assistant secretary at the US Treasury overseeing sanctions and now at risk advisory company K2 Integrity, told a podcast for the think-tank OMFIF that the speed of the west’s response was a “revolution” that aimed to “tank the Russian economy”.

But he warned that US, UK and EU sanctions may not change President Vladimir Putin’s military aims and the question would be “how much pain is Russia willing to endure”. Kremlin spokesman Dmitry Peskov said on Wednesday the Russian economy was facing “serious pressures and a serious blow”.

Authorities are trying to minimise opportunities for capital to flee Russia, with restrictions imposed on foreigners selling assets and locals transferring money abroad.

Once the initial crisis period of adjustment is over, the sanctions are expected to have a chronic impact on Russia, by limiting growth, imports and the opportunity to spend oil and gas revenues. Russia’s economy will become much more insular but energy exports will still generate a trade surplus.

Western policymakers intend the measures against Russia to have a similar impact to sanctions imposed on Iran by then-president Donald Trump in 2018 after the US withdrawal from the 2015 nuclear agreement, although they are not on the same scale or cover the same breadth of sectors. Those measures were focused on reducing Iran’s revenue from oil exports, the country’s economic lifeline, to zero.

Iran is still completely cut off from the world’s financial system, including the Swift payments network that now excludes some Russian lenders. Its economy has suffered significantly. IMF figures suggest that gross domestic product per capita sank 15 per cent across 2018 and 2019 and that Iranians will not regain 2016 levels of living standards until at least a decade later. Inflation, which hit 48 per cent at the end of 2018, is forecast to remain well above 25 per cent.

But in a sign of the potential impact on Russia, Iran’s oil exports to friendly countries continue and the economy has not collapsed. Supermarket shelves are usually full, and petrol stations rarely suffer fuel shortages. Wealthier Iranians, many of whom have political ties to the leadership in Tehran, have maintained their luxurious lifestyles.

“With a nuclear agreement, Iran can have 15 per cent economic growth,” said Saeed Laylaz, an Iranian analyst. “Without an agreement, if oil prices remain high and Iran can continue to sell 1mn barrels a day [of oil] or so, and with rises in taxation, it can run the economy and have [modest] growth.”

Iran’s diversification of its economy and its reliance on trade with its neighbours as well as China have allowed officials in Tehran to claim that it has survived and won what it terms “the economic war”.

Even if it must accept lower prices for its oil as the markets begin to shun its crude, economists expect Moscow to be able to run a similar siege economy, using hard currency from oil and gas sales to buy imports from countries and companies willing to supply Russia.

The Institute of International Finance said the sanctions would have a “dramatic effect” on Russia’s financial system, and the decline in the rouble, even with capital controls in place aimed at stopping money fleeing the country, will raise inflation and lead “to a sizeable contraction of output this year”.

Goldman Sachs said sanctions on the central bank, hampering its defence of the rouble, would raise inflation to 17 per cent by the end of the year. That figure is consistent with the central bank’s more than doubling of its interest rate to 20 per cent, a rise necessary to attract deposits to Russian banks.

It cut Russia’s growth forecast for 2022 from 2 per cent before the sanctions to -7 per cent, with public and private domestic spending expected to fall 10 per cent or more.

But Clemens Grafe, central and eastern Europe economist at Goldman Sachs, said the immediate crisis for Russia would dissipate in six to nine months when it had earned enough from oil and gas sales to offset the sanctions placed on the central bank’s foreign exchange reserves.

Then it could operate a much more domestically focused economy, using income from energy to buy imports, most probably from China, with economic life for Russians surviving amid a weakened state. 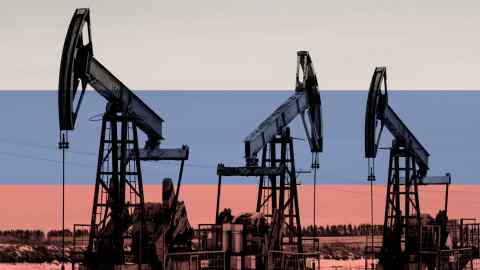 Grafe lowered his long-term trend growth forecast for Russia from 2.75 per cent a year to 1 per cent. “The import restrictions will make it increasingly difficult to keep productivity growth at past levels,” he said, predicting a “similar reduction to that we observed given the reduction of foreign direct investment post 2014”.

With imports sharply reduced and foreign currency gains from trade used to shore up the rouble, Russia’s trade surplus will be its lifeline to run a siege economy.

Putin’s ministers have recognised the public will have to endure pain as sanctions drive down living standards, but they are sending the message that they are determined to tough it out.