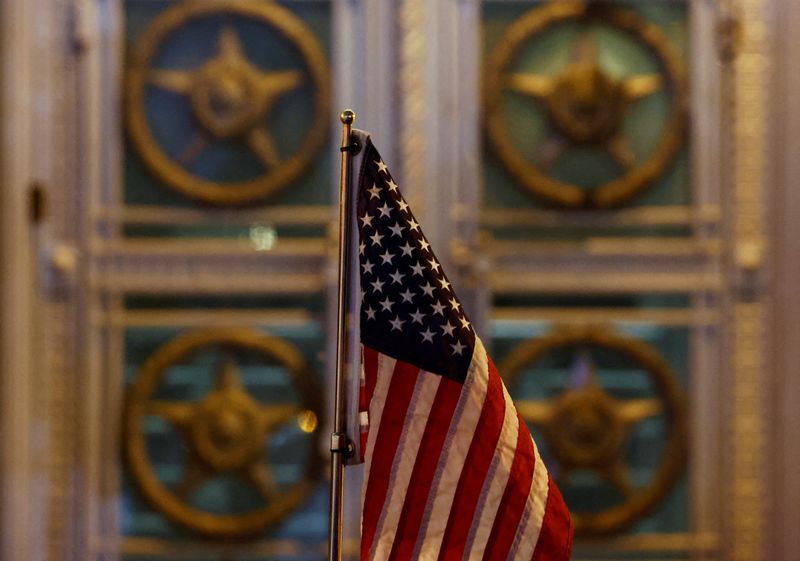 © Reuters. A flag is seen on the U.S. delegation’s car, which is parked in front of the headquarters of the Russian Foreign Ministry in Moscow, Russia January 26, 2022. REUTERS/Maxim Shemetov

The comments narrow the scope of potential curbs on imports to Russia that had previously been described as disrupting Russia’s economy more broadly, hitting industrial sectors and consumer technologies like smartphones.

“We can’t preview every action, but the intent there really is to have measures that we think will degrade Russia’s industrial capabilities and industrial production capacity over time, not to go after individual, everyday Russian consumers,” White House national security official Peter Harrell said in a virtual speech for the Massachusetts Export Center on Thursday that received little media coverage.

Harrell, who sits on the National Security Council, said the United States was prepared, immediately after an invasion of Ukraine, to impose “crippling financial costs on major Russian financial institutions as well as to impose a range of quite sweeping export controls that will degrade Russian industrial capacity over the mid- and long term.”

Commerce Department official Thea Kendler, who spoke to the export gathering on Friday, said “We are contemplating massive sanctions targeting key people and industries that were not on the table in 2014.” That year Russia invaded and annexed Crimea from Ukraine.

Harrell said he hoped the hundreds of hours he and his colleagues had spent over the last couple of months developing measures would never see the light of day, but that they are prepared to impose the sweeping measures.

Export control measures would be announced as part of the package but would probably not have the same immediate impacts, and instead “degrade Russia’s ability to have industrial production in a couple of key sectors”.

Harrell did not detail the sectors, but other White House officials have mentioned aviation, maritime, robotics, artificial intelligence, quantum computing and defense.

A person familiar with the matter told Reuters on Thursday the focus was on strategic sectors significant to Russian leadership. Asked about Russia’s lucrative oil and gas sector, the person said nothing was off the table.

In a follow-up comment, White House spokesperson Emily Horne also said no options had been eliminated.

“We and our allies have a full range of high-impact sanctions and export controls ready to go, both immediately after a Russian invasion and in waves to follow,” Horne said.

Harrell said he expected the European Union to join in the effort. “Based on the discussions I’ve been having and, frankly, people way above me … we are quite confident we will have a very high degree of alignment with Europe if Russia does invade Ukraine.”

Sources have said the U.S. also may apply a rule to stop companies abroad from shipping items like semiconductors made with U.S. technology to Russia, as it did to curb the global chip supply to China’s Huawei, which it views as a threat.

The person familiar with the matter said on Thursday that U.S. officials are also having conversations with Taiwan and South Korea, where major manufacturers of chips are located, and countries in southeast Asia, where some packaging is done.