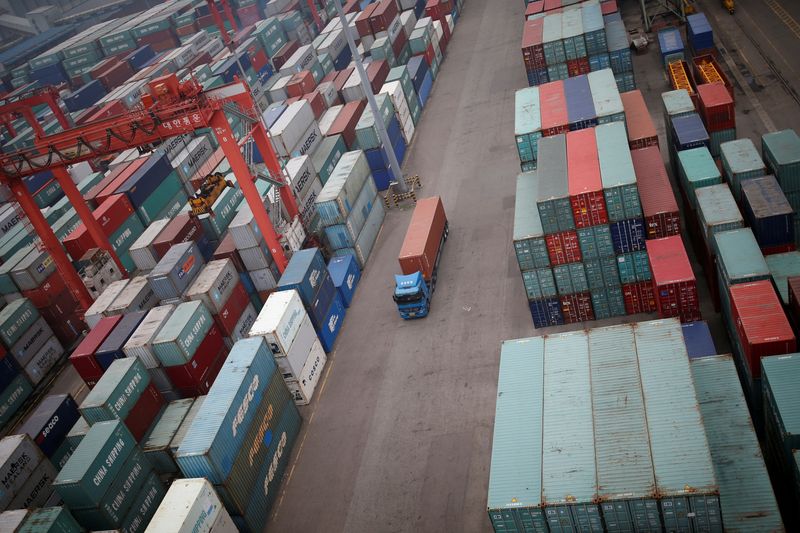 © Reuters. FILE PHOTO: A truck drives between shipping containers at a container terminal at Incheon port in Incheon, South Korea, May 26, 2016. REUTERS/Kim Hong-Ji

SEOUL (Reuters) -South Korea’s exports expanded at their fastest pace in 11 years in 2021, with the total export value reaching a record high, supported by post-pandemic recoveries in global demand.

“Now is the time to head towards the $700 billion export-era … The trade ministry will step up policy efforts so that industries and exports can tow the complete (economic) normalisation this year,” Minister Moon Sung-wook said.

A breakdown by items showed exports of semiconductors jumped 29% year-on-year to a record $128 billion, while those of petrochemicals also surged 54.8% to a record $55.1 billion. Other items such as cars and steel jumped 24.2% and 37%, respectively.

By destination, exports to China, South Korea’s biggest trading partner, rose 22.9%, and those to the United States and the European Union jumped 29.4% and 33.9%.

Moon also said the ministry is reviewing joining the Comprehensive and Progressive Agreement for Trans-Pacific Partnership (CPTPP) and aims for more trade pacts to expand its export markets.

Saturday’s data also showed exports in the final month of the year expanded 18.3% year-on-year, extending growth into a 14th straight month, though the rate was slower than 32% in November. A Reuters’ poll of 13 economists had expected 22% growth.

Total exports stood at $60.74 billion in December, the largest ever monthly figure.

A 35.1% jump in semiconductors exports led December growth, while overall exports to China and the United States also soared 20.8% and 22.9%, respectively.