Members of the Sackler family who own Purdue Pharma have offered up to $6bn to resolve the company’s bankruptcy settlement, two months after a federal judge overturned it due to a provision that protected them from civil liability over the US opioid crisis.

A court-appointed mediator published a report on Friday detailing the new offer, which is up to $1.5bn more than an earlier settlement agreed by a majority of claimants including US states, localities and opioid victims.

No final agreement has yet been reached, according to the mediator, who has asked the court to extend its deadline for further discussions until February 28.

The initial settlement struck in federal bankruptcy court was thrown out following a legal appeal by a group of eight US states and the attorney for the Southern District of New York, which argued that Sackler family owners were benefiting from the bankruptcy process without having personally filed for Chapter 11 protection themselves.

The objectors pointed to analysis presented in the bankruptcy court that showed the Sackler family members who own Purdue had taken more than $10bn out of the company between 2008 and 2017.

As a requirement for the Sacklers’ contribution to the original agreement, the family members had demanded that they could no longer be pursued for liability. Lawyers for Purdue warned that without such a settlement, years of litigation would delay payments to victims and shrink the available pot.

Purdue, maker of the powerful painkiller OxyContin, had filed for bankruptcy in New York in 2019 amid a wave of litigation over its alleged role in the opioid epidemic which has killed more than 500,000 Americans. The court-supervised restructuring was used to halt lawsuits against Purdue and the Sacklers in order to facilitate a global settlement. 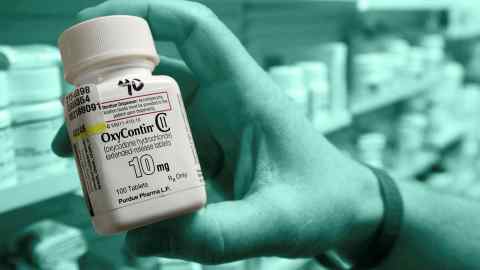 The mediator’s report noted that a settlement is within reach with a supermajority of the nine objectors agreeing to the new terms. However, the Sackler offer is contingent on agreement by all of the objecting parties, it said.

Under the revised settlement offer the Sackler family members would contribute between $5.5bn-$6bn, with some of the additional cash contingent on asset sales. All the money would be used exclusively for abatement of the opioid crisis, including support and services for survivors, victims and their families.

Under the original settlement agreement, the assets of Purdue were to be transferred to a new company that would develop treatments for opioid abuse and manufacture drugs unrelated to pain relief. In return, members of the Sackler family would be protected from all lawsuits over their alleged role in fuelling the opioid crisis.