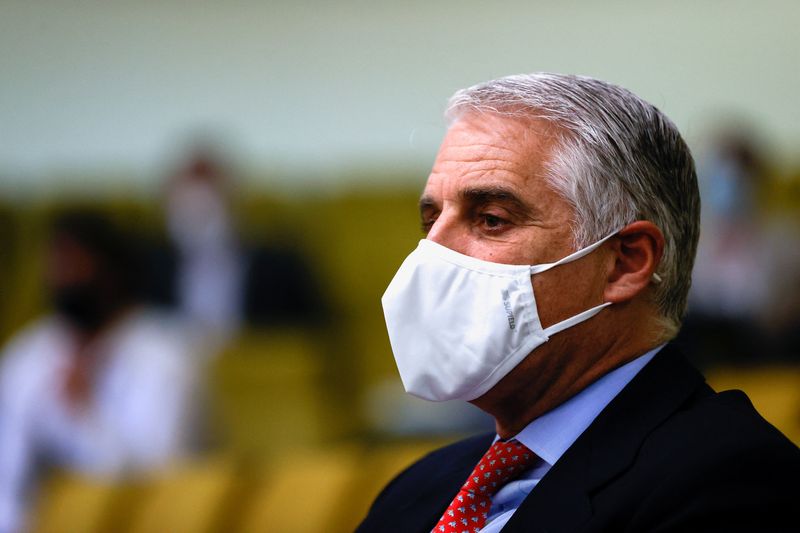 © Reuters. FILE PHOTO: Italian banker Andrea Orcel attends a trial against Santander over the bank’s withdrawal of a CEO job offer to him, in a high court in Madrid, Spain, May 19, 2021. REUTERS/Juan Medina

By Jesús Aguado and Emma Pinedo

MADRID (Reuters) – A Madrid court has ordered Santander to pay Italian banker Andrea Orcel 67.8 million euros ($76.42 million) after it withdrew its offer to make him CEO, a pricey twist in an employment dispute that has captivated the world of high finance. The row between Orcel and Santander chairman Ana Botin ruptured a close professional bond – Orcel had previously been Botin’s investment bank consigliere – and put Europe’s star dealmaker abruptly out of a job.

Orcel and Botin ended up in court after Spain’s largest bank dropped its plans to make the former UBS investment banker its CEO as a result of a disagreement over his pay. Orcel had already left UBS to prepare for the new role.

The court said Santander’s job offer letter to Orcel was a binding contract and Santander will have to compensate him.

“The contract was unilaterally and arbitrarily rescinded by Banco Santander (MC:),” the court said in its ruling, which can be appealed in 20 days before a Madrid regional court.

Appeals could delay a final ruling for another one or two years if legal proceedings reach Spain’s Supreme Court, several court sources said.

A spokesperson for Santander said the bank would appeal the ruling.

“The Board of Santander is confident we will be successful on appeal as we were in the two criminal complaints already considered by the courts in relation to this matter,” the spokesperson said.

Both Orcel’s legal team and a spokesperson for the Italian banker declined to comment.

The court ruling caps a successful week for Orcel, who is now CEO of UniCredit. He won plaudits on Thursday when he unveiled a new strategy for the Italian bank, pledging to return 16 billion euros to investors, sending its shares to their highest since February 2020.

Santander is also requested to pay legal interest since the date of filing.

Some industry insiders considered the ruling a blow for Botin and the bank as she had personally courted Orcel for the role over the summer of 2018.

“It will be a blow for Santander but any reputational damage to Botin or the bank itself is expected to fade over time as the amount won’t really hit a bank with such a capacity to generate billions in profit,” Enrique Quemada, CEO of Spanish investment bank ONEtoONE, told Reuters when asked to comment on the court ruling.

Quemada and lawyers said that the compensation Orcel was entitled to was in line with highly rewarded pay packages at top jobs in the industry.

“In a civil court, such an amount is not unheard of. The amount seems outrageous but he seems to be the Lionel Messi of banking,” said Eduardo Alonso, lawyer with Spanish firm A&M Asociados.

The case revolved around whether a four-page offer letter to Orcel in September 2018 was a binding contract or a non-binding initial offer, as Botin asserted in the first session of the Madrid court hearing in May.

In January 2019, Santander said the bank could not meet Orcel’s pay demands, which included covering up to 35 million euros of a 55 million euros compensation package he was due to receive in future years from UBS.

Orcel originally sought as much as 112 million euros from Santander for breach of contract and damage to his career for the bank’s sudden U-turn.

But in May he dropped the part of his legal claim that would require the Spanish bank to hire him. This was after he was appointed UniCredit CEO.

He also reduced his demand to between 66 to 76 million euros, according to sources close to the matter, a court document and Santander’s lawyer.

At the hearing in May, Botin and Orcel, who himself had not been called to testify, sat just a few seats apart.

During the hearing Botin testified that Orcel had also breached the terms of the offer letter, which stated he would make his best efforts to reduce the amount of deferred compensation Santander owed him.

She said he had refused to deduct 13.7 million euros he was to receive as a bonus from UBS for work done in 2018 from the sum owed him.

But on Friday, the court said that it could not be considered as proven that Orcel did not make his best efforts to try to reduce the buyout.

In October, the court had referred to the testimony of Axel Weber, the chairman of UBS, who said Orcel contacted him repeatedly because he was not happy with UBS’ decision not to stump up his deferred pay if he quit to join the Spanish rival in late 2018.

“Mr Orcel’s best efforts are considered beyond doubt,” the court said in its 24-page ruling.