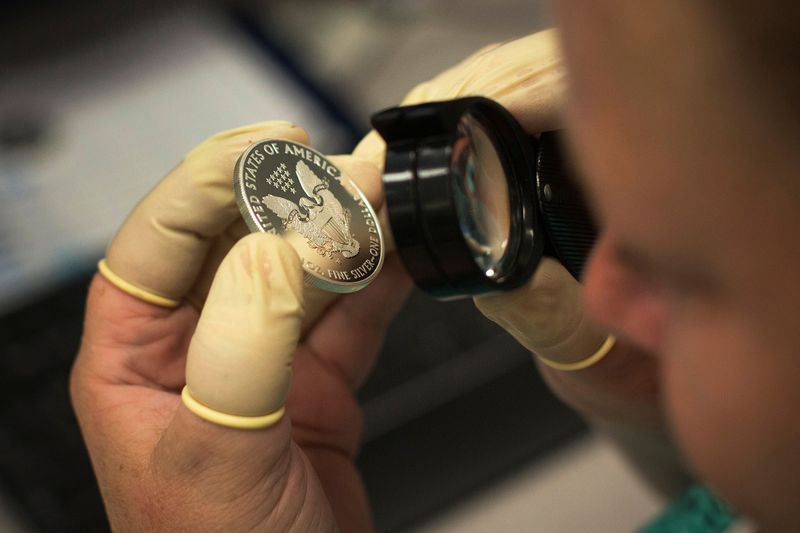 (Reuters) – A retail investment frenzy in silver driven by social media has left dealers from the United States to Singapore scrambling for bars and coins to meet demand.

Silver prices extended their rally on Monday to an eight-year high as small investors answered calls on social media last week to buy the metal to push up prices. Retail investors cannot directly access the wholesale silver market, so instead they have bought into bars and coins. [GOL/]

“There are massive shortages. We’ll be completely out of stock if it carries on like this – the first time since our company opened in Singapore seven years ago,” said David Mitchell, managing director at Indigo Precious Metals.

Other U.S. dealers, including JM Bullion and SD Bullion, warned customers of shipping delays of five to 10 days. Everett Millman at Gainesville Coins in Florida said they were expecting shipping delays, perhaps until perhaps mid-March, for some products like Silver Eagles and Silver Maples.

While a rapid spike in demand has tightened supplies, there is plenty of metal around and delays should ease once metal can be shipped to where it is needed, dealers and industry experts said.

Kevin Rich, global gold market adviser for Australia’s Perth Mint, said that while dealers of coins and bars might see some supply constraints and therefore charge higher premiums on these products, the Mint does not anticipate any such issues.

There is enough airline traffic to ensure supply can move around, he said, unlike last year when the lack of freight capacity disrupted gold markets.

“In the short term, stocks may run out since it takes a long time for sea shipping, but overall supply is ample,” said Peter Fung, head of dealing at Hong Kong-based Wing Fung Precious Metals.

Around 1 billion ounces of silver are produced and consumed each year, and supply has been in surplus for most of the last decade, consultants Metals Focus said.

“There are no signs yet of a broader physical squeeze across silver and we would not expect any at this stage,” said Frederic Panizzutti, managing director at dealer MKS.

There was more muted buying in China and India, the leading Asian consumers of physical bullion.

Chinese investors piled in to the futures market and mining company stocks, but dealers said the rush was yet to actually translate into physical constraints.

“In contrast to what’s happening in other parts of the world, silver is seen as more of a consumption, rather than investment, commodity in India,” the bullion division head of a Mumbai-based silver importing bank said.

India and China typically account for a quarter to a third of global demand for retail silver investment products such as bars and coins, according to Metals Focus data.