Samsung, Hyundai, SK Group and LG, the country’s four biggest conglomerates, are leading the efforts as they bow to pressure from Washington to produce strategically sensitive goods such as semiconductors and electric vehicle batteries in the US.

LG will open a lobbying office in Washington next year, after its battery-making unit LG Energy Solution was embroiled in a multibillion-dollar legal dispute with domestic rival SK Innovation that threatened to disrupt Ford’s electric car plans in the US. The company also had to reimburse General Motors after a costly electric vehicle recall over battery flaws.

The Korean groups are seeking export licences to supply US-blacklisted Chinese companies, including technology group Huawei and chipmaker Semiconductor Manufacturing International Corp. The US commerce department had granted more than $103bn in export licences to Huawei and SMIC from November 9 2020 to April 2021.

“We are trying to hire Americans with connections to Washington as we need to strengthen networking with the US government and Capitol Hill,” said an executive at LG Energy Solution.

“We need to respond quickly to the changing global agenda and minimise business risks in global supply chains amid the worsening US-China relations, the changing international trade order and ESG [environmental, social and governance] requirements. We need an effective channel to deliver our stance to Washington,” the executive added.

SK Hynix, the world’s second-largest memory chipmaker, set up an internal unit last month to manage its US business as it works to complete a $9bn acquisition of Intel’s Nand flash memory business.

Analysts said the company was also considering building a wafer plant in the US after struggling to upgrade its Dram facility in Wuxi, China. The US has historically been opposed to exporting advanced equipment to China.

Last month, Chey Tae-won, SK Group chair, said the group had no plan to build a wafer fab in the US, and was only studying preconditions.

“Korean chipmakers now have to deal with the commerce department and Pentagon more often to discuss security concerns. So they need to hire more former US officials as their lobbyists,” said Kim Young-woo, an analyst at SK Securities.

SK E&S, the group’s energy unit, will open a New York office headed by vice-chair Yu Jeong-joon in 2022 after taking over several US energy companies in recent years.

“From semiconductors to batteries and hydrogen, US interest in Korean companies is growing sharply,” said an SK official. “We will see more executives with overseas business experience move to the US while the group hires more lobbyists for effective communication with Washington.”

Samsung Electronics last month appointed a president-level executive for the first time to lead its device solutions business in the US. The move came as the company plans to build a $17bn chip plant in Taylor, Texas. 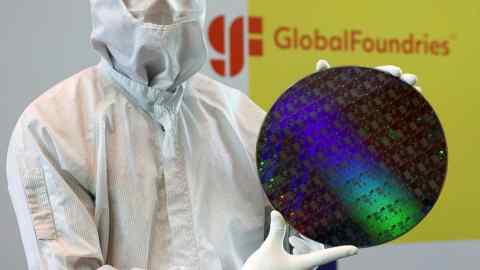 The Korean campaign has coincided with efforts by rival regional chipmakers to increase their US lobbying presence.

Taiwan Semiconductor Manufacturing Company, the world’s biggest contract chipmaker, has raised its profile markedly in Washington. It is building a $12bn chip factory in Arizona and competing for $52bn in chip subsidies announced by President Joe Biden’s administration.

The company hired Nicholas Montella, a former executive at the US Chamber of Commerce, as its government relations director last year and recruited Peter Cleveland, a former top lobbyist at Intel, as vice-president for global policy and legal matters in 2019.