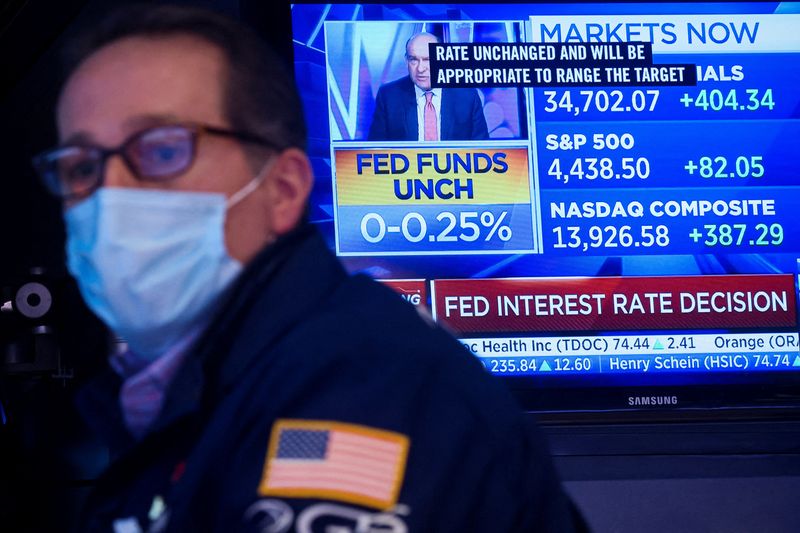 © Reuters. A screen displays the Fed rate announcement as a specialist trader works at his post on the floor of the New York Stock Exchange (NYSE) in New York City, U.S., January 26, 2022. REUTERS/Brendan McDermid

NEW YORK (Reuters) – Wall Street gyrated wildly on Thursday, the once again narrowly avoiding correction confirmation at the end of a session marked by a rally, selloff and recovery as investors juggled positive economic news with mixed corporate earnings, geopolitical unrest and the prospect of a more hawkish Federal Reserve.

All three major U.S. stock indexes ended lower, having been whipsawed by uncertainty in recent days, marked by wide fluctuations and heightened volatility.

Smallcaps have had a rougher go of it, with the now more than 20% below its Nov. 8 record high, officially confirming the index has been in a bear market since then.

“This is a market that is schizophrenic,” said Tim Ghriskey, senior portfolio strategist at Ingalls & Snyder in New York. “There are those who believe everything negative has been discounted and there are others who believe that the worst is yet to come.”

“It’s a period of a lot of uncertainty, it’s been this way all month,” Ghriskey added.

Among a spate of economic data released on Thursday, the Commerce Department’s advance take on fourth-quarter GDP shows the U.S. economy in 2021 grew at its fastest pace in nearly four decades.

Markets seesawed following the release on Wednesday of the FOMC statement, which left key interest rates near zero, and Fed Chairman Jerome Powell’s subsequent Q&A session during which he appeared to raise the possibility of more rate hikes this year than previously expected, beginning in March.

The fed funds futures market now prices in nearly five rate hikes this year in the wake of Powell’s remarks.

Geopolitical tensions simmered, as Russia continues to build up troops along the Ukrainian border and diplomats scramble to avoid conflict in the region.

Of the 11 major sectors in the S&P 500, five ended in the red, with consumer discretionary stocks suffering the largest percentage slide.

Fourth-quarter reporting season has hit full stride, with 145 of the companies in the S&P 500 having reported. Of those, 79% have delivered consensus-beating results, according to Refinitiv data.

Analysts now see, on aggregate, year-on-year fourth-quarter earnings growth of 24.2% for the S&P 500, per Refinitiv.

“The numbers and especially the guidance has not been that inspiring and that’s a factor that’s been limiting the upside so far this week,” said Chuck Carlson, chief executive officer at Horizon Investment Services in Hammond, Indiana.

Supply-chain challenges, the engine driving inflation through the recovery from the global health crisis, have been a recurring theme this earnings season.

Intel Corp (NASDAQ:) cited that issue as the reason behind its disappointing first-quarter earnings forecast, which sent its shares tumbling 7.0%.

Shares of Tesla (NASDAQ:) Inc dropped 11.6% after the company warned that supply issues will last throughout 2022. Shares of rivals Lucid Group and Rivian Automotive were down 14.1% and 10.5%, respectively.

Declining issues outnumbered advancing ones on the NYSE by a 2.65-to-1 ratio; on Nasdaq, a 3.71-to-1 ratio favored decliners.

Volume on U.S. exchanges was 13.29 billion shares, compared with the 11.86 billion average over the last 20 trading days.