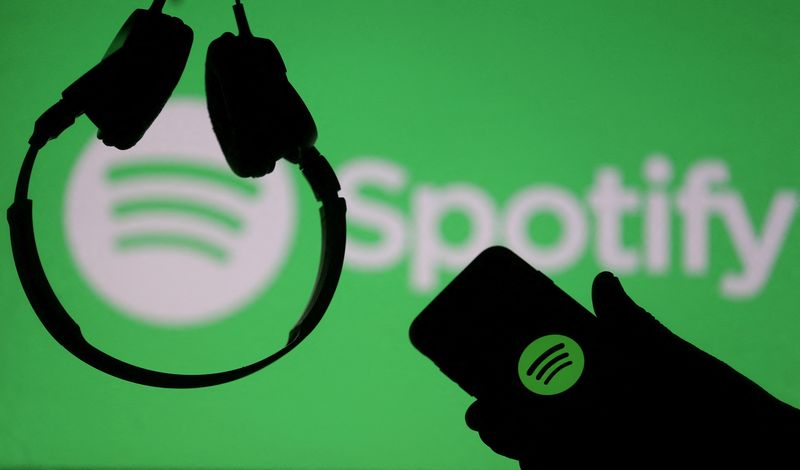 © Reuters. FILE PHOTO: A smartphone and a headset are seen in front of a screen projection of Spotify logo, in this picture illustration taken April 1, 2018. REUTERS/Dado Ruvic/Illustration/File Photo

By Supantha Mukherjee and Dawn Chmielewski

STOCKHOLM/LOS ANGELES (Reuters) -Spotify on Wednesday forecast current quarter subscribers lower than Wall Street expectations, but executives sought to reassure investors that growth had not cratered even as it deals with the fallout from the controversy around The Joe Rogan Experience podcast.

The company’s shares fell as much as 18% in late trading after Spotify (NYSE:) reported the subscriber outlook.

In an interview with Reuters after the report, Spotify Chief Financial Officer Paul Vogel said this year would not be that much different than last in terms of users and subscribers.

“While we have not given full year guidance anymore on subscribers … we don’t expect a material difference in the net additions for either users or subscribers in 2022 relative to 2021,” Vogel told Reuters.

Shares pared losses and were down between 3% to 9% after the initial shock.

The outlook overshadowed fourth-quarter revenue, which came in higher than analysts’ estimates, as the music streaming company sold more advertisements and newer services such as podcasts, while recording a healthy 16% increase in paid subscribers for its premium service.

The company, however, forecast current-quarter paid subscribers of 183 million, below expectations of 184 million. Revenue is expected to meet estimates of 2.60 billion euros.

Spotify said it would no longer offer annual guidance on subscribers.

“So if you look at ’21 as a sort of proxy for kind of net additions that 2022 will be good, not materially different,” Vogel said.

The subscription music streaming service has invested over a $1 billion in the podcasting business, led by marquee exclusive shows such as The Joe Rogan Experience.

But the allure of the podcast star also drew condemnation after his show aired controversial views around COVID-19, drawing protests from artists Neil Young and Joni Mitchell.

Rogan, a popular internet commentator, has since apologized and Spotify said it would start adding content advisories to episodes discussing COVID.

“We have taken action on more than 20,000 podcasts since the start of the pandemic,” Ek told Reuters. “So that tells you something about the scale of this operation. It’s truly a global operation.”

Ek acknowledged the Rogan controversy at the outset of the earnings conference call, saying it presented learning opportunities. He said he was proud of the steps Spotify took following the concerns raised by the medical and scientific communities and he says policies were developed with input from internal and external exports.

“While Joe has a massive audience, he’s actually the number 1 podcast in more than 90 markets, he also has to abide by those policies,” Ek said.

Spotify said podcast’s share of overall consumption hours on its platform reached an all-time high and it expanded its paid podcast subscriptions in 33 more markets and enabled podcasts for users in Russia, Egypt and Saudi Arabia.

Premium subscribers, which account for most of the company’s revenue, rose to 180 million, beating analysts’ expectations of 179.9 million.

Quarterly revenue rose to 2.69 billion euros ($3.04 billion) for the quarter from 2.17 billion a year earlier, and above the 2.65 billion euros expected by analysts, according to IBES data from Refinitiv.

Revenue from users who hear advertisements rose 40% to 394 million euros or 15% of total revenue.

“As Spotify moved from a music platform to an audio platform (podcasting, live audio, audiobooks), it has unlocked the potential for a robust advertising business that is now too large for investors to ignore.”

Spotify ventured into podcasts in 2018 with a series of acquisitions to compete with Apple Inc (NASDAQ:). Since then it has launched a paid subscription platform for podcasters in the U.S., opened it up for advertising, and became the largest podcaster dethroning Apple.

Unlike the music business, which is largely commoditized and low margin as it pays out a part of the revenue to the rights holders, podcasts engage listeners for hours on end, creating valuable advertising inventory that has underpinned the optimism by Wall Street over its long term future.