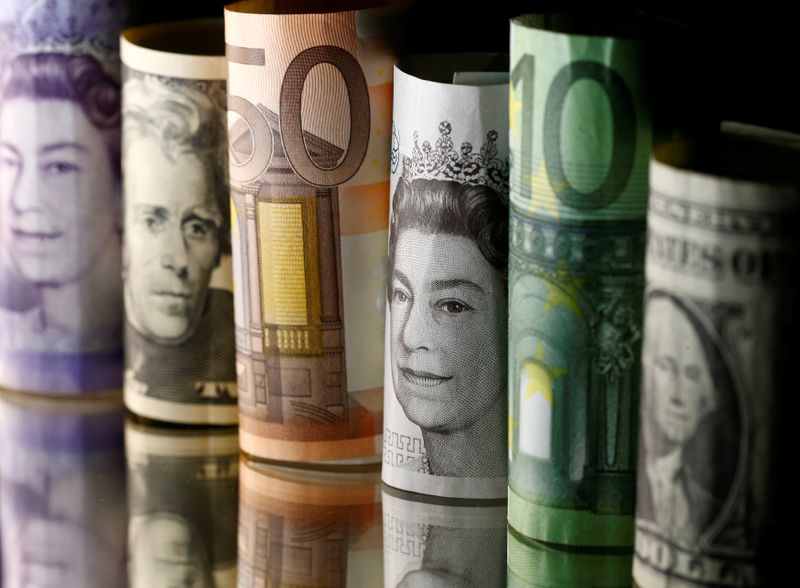 HONG KONG (Reuters) – The dollar lost ground on the euro and sterling on Thursday after the U.S. Federal Reserve said it would not rush to raise interest rates even as it began unwinding its pandemic-era stimulus.

The Fed, on Wednesday, announced a $15 billion monthly cut to its $120 billion in monthly purchases of Treasuries and mortgage-backed securities, but chair Jerome Powell said the U.S. central bank would be “patient” in deciding when to raise its benchmark overnight interest rate from near zero levels.

Sterling climbed to $1.3695 in Asian hours on Thursday, extending Wednesday’s 0.51% gain due to the more dovish Fed, and recovering from Tuesday’s two-week low of $1.3603

The euro rose to $1.1614 also having rallied on Wednesday after the announcement, gaining 0.29% that day.

Market attention is now turning to how long the Fed can defer rate rises, given fears that high inflation could last longer than the Fed had initially projected.

“The Chairman stressed that this (Federal Open Market Committee) meeting was much more about (quantitative easing) than interest rates but this will be the last meeting in which that reasoning will hold. From here on, future FOMC meetings are going to return the focus back to the Fed’s interest rate strategy and tactics,” said Paul O’Connor, head of multi asset at Janus Henderson Investors in emailed comments.

A busy two weeks of central bank meetings comes to an end with the Bank of England meeting on Thursday when it could become the first of the world’s big central banks to raise rates since the coronavirus pandemic hit.

Unlike the Fed, where the market and observers were all but certain it would taper stimulus on Wednesday, there is less consensus around the BofE’s decision

Elsewhere, the dollar climbed slightly to $0.7463, helped by the softer dollar, but has more work to do to recover from its 1.2% fall on Tuesday after the Reserve Bank of Australia adopted a dovish tone at its key meet.

The yen stayed soft, however, with one dollar at 114.04 yen within a good leap of the dollar’s multiyear high of 114.69 hit last month.