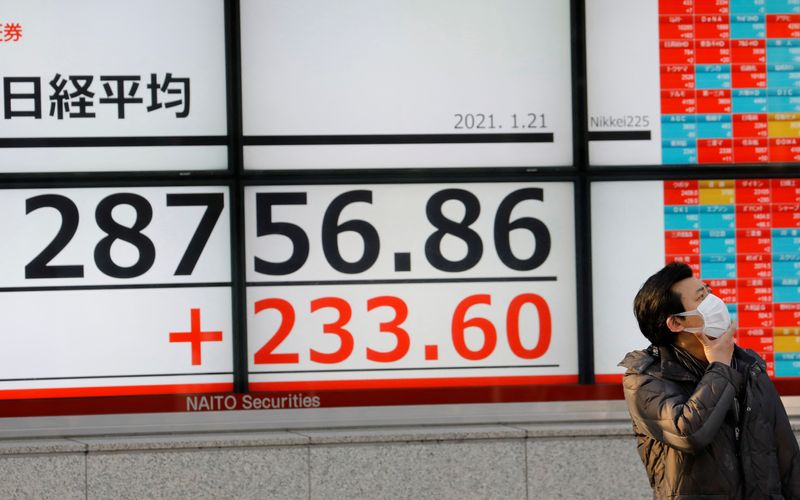 © Reuters. FILE PHOTO: A man wearing a protective mask, amid the coronavirus disease (COVID-19) outbreak, stands in front of an electric board showing Nikkei index outside a brokerage in Tokyo, Japan January 21, 2021. REUTERS/Kim Kyung-Hoon

LONDON (Reuters) – European shares dropped on Friday, following on from losses in Asia and a late slump in the U.S. as fears about the pace of monetary policy tightening and a batch of weaker-than-expected earnings knocked investor confidence again.

Oil prices pulled back too as another bout of risk aversion spread across markets and sent traders looking for safety in government bonds.

The Nasdaq, the standout performer of the stock market boom since the pandemic started, has fallen more than 10% from its peak and is on track for its worst week since 2020. Futures pointed to more losses in the United States when Wall Street opened.

Chinese shares were also weaker, even a day after China cut its benchmark mortgage rates on Thursday, the latest move in a burst of monetary easing aimed at propping up an economy soured by a troubled property sector and worries over the Omicron variant of coronavirus.

But the sharpest drops in recent days have been in U.S. markets.

“In the last two, three years, whether it was stocks, bonds, currencies, you had constant flows into the United States while great uncertainty built and it was the epicentre of the excess liquidity being created. And we’re just turning the movie backwards,” said Mike Kelly global head of multi asset at PineBridge.

He added that while the economy could handle rate hikes, markets might not and they needed to realise “the Fed is no longer your friend”.

Investors are anxiously awaiting the Federal Reserve’s FOMC meeting next week for details on how it intends to tackle high inflation. Markets now price in at least four rate hikes this year, and traders said to expect more volatility until the Fed provides some clarity on how fast it will tighten.

“Less than a week out from the FOMC meeting, investors are worried that the central bank is going to flag aggressive rate hikes and an imminent and rapid unwind of its balance. In effect, it may throw the stock market under the bus to stamp out inflation,” Rodda said.

In commodities, oil prices plunged after rising to seven-year highs this week, as an increase in and fuel stockpiles prompted investors to take profits from the rally.

U.S. Treasury yields were slightly lower along the curve, having risen sharply earlier in the week. [US/]

Rising yields had helped the dollar to gain earlier in the week, although on Friday the eased 0.1% against a basket of six major currencies. The euro rose 0.2%.