Chancellor Rishi Sunak has agreed to tie his own hands at next month’s Budget by sticking with the Conservatives’ “triple tax lock”, which stops him raising the rates of income tax, national insurance or value added tax.

Treasury officials had hoped Mr Sunak would ditch the Tories’ 2019 election manifesto commitment, which stops him using the three biggest tax levers to start curbing a deficit that is expected to top £400bn in 2020-21 because of the coronavirus crisis.

Instead, Mr Sunak has agreed with Boris Johnson that the triple tax lock must be maintained, according to government insiders — a move that could force him to seek increases in other taxes, including corporation tax and possibly capital gains tax.

“To go back on the manifesto pledge would be a betrayal of trust — pandemic or no pandemic,” said one aide to the chancellor. “It was a very significant pledge at the last election.”

One cabinet minister added: “Boris feels he owes it to our core voters and we can’t go back on our core promises, even with the pandemic.”

Some Treasury officials had thought Mr Sunak might abandon the triple tax lock, given the chancellor has spent about £280bn fighting the Covid-19 pandemic. “There is a very good case for saying that Covid-19 has changed everything,” said one.

Mr Sunak showed he was willing to ditch Conservative manifesto commitments in last November’s spending review, when he abandoned a Tory pledge to devote 0.7 per cent of gross domestic product to overseas aid and dropped the party’s promise to lower the burden of public debt.

Given that income tax, national insurance and VAT accounted for 64 per cent of all tax revenues in 2019-20, Mr Sunak will have to look at large increases in taxes that raise smaller amounts in order to secure the money needed to stabilise the public finances.

“Rishi does want to get back to dealing with the deficit and cutting the debt-to-GDP ratio,” said one close colleague of the chancellor. “The levers he has to pull in terms of money coming into the exchequer are limited.”

Although Mr Sunak is expected to announce only limited tax increases in his March 3 Budget — because he wants the economy to emerge from its virus-induced emergency first — bigger ones could follow. He is due to hold another Budget in November.

The corporation tax rate, currently 19 per cent, could initially rise in the March Budget and ultimately reach 23 or 24 per cent over the parliament but still remain competitive with other advanced economies — Mr Sunak’s stated goal.

Senior Conservatives claimed there had been tensions between the prime minister and Mr Sunak over a possible rise in capital gains tax, which many Tory MPs believe would be “a tax on entrepreneurs”.

Mr Sunak is eyeing an increase in capital gains tax after an advisory body last year recommended reform, while Mr Johnson is seen in the Treasury as an instinctive opponent of tax rises. 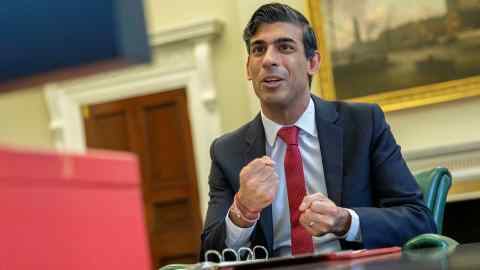 One government insider told colleagues on a conference call last week that “not for the first or last time, the tensions are real” between 10 and 11 Downing Street.

The Treasury declined to comment on capital gains tax. But allies of Mr Sunak insisted there was no disagreement between the chancellor and Mr Johnson on the issue.

David Gauke, a former Conservative Treasury chief secretary, said: “Rishi is serious and wants to sort out the public finances. I would be very surprised if that was the priority of the prime minister.”

Other tax-raising options for the November Budget — such as reform of the costly system of pension tax relief or a new property tax — would incur the wrath of many Conservative MPs.

Former Treasury permanent secretary Nick Macpherson has outlined a break with his old department’s opposition to hypothecated taxes by proposing a dedicated “social solidarity charge” to fund the NHS and social care.

Mr Sunak’s interest in future tax rises is a warning to some Tory MPs to rein in their demands for higher spending. He has told colleagues in private meetings that extra spending will have to be paid for.

In a sign of Mr Sunak’s pursuit of fiscal discipline, Conservative chief whip Mark Spencer last week told Tory MPs that there would be serious consequences if they opposed any measures contained in the Budget.