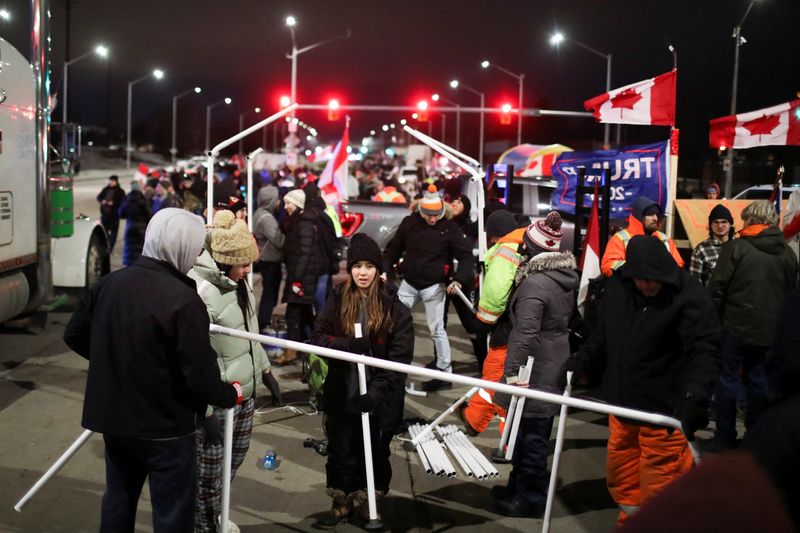 Canada’s Ontario province declared a state of emergency on Friday and threatened to fine and jail protesters if they don’t leave.

Piling on to earlier calls for action by U.S. officials and business leaders, Biden expressed his concerns over plant closures and production slowdowns during the phone call with Trudeau, the White House said in a statement.

“The two leaders agreed that the actions of the individuals who are obstructing travel and commerce between our two countries are having significant direct impacts on citizens’ lives and livelihoods,” the statement said.

“The Prime Minister promised quick action in enforcing the law, and the President thanked him for the steps he and other Canadian authorities are taking to restore the open passage of bridges to the United States,” it added.

Trudeau told reporters that he agreed with Biden that the blockades cannot continue, and that Canadian banks were monitoring financial activity related to the funding of the protests and taking necessary action.

The “Freedom Convoy” protest, launched by Canadian truckers opposing a vaccinate-or-quarantine mandate for cross-border drivers, is also occupying areas outside government buildings in the capital city of Ottawa and has blocked two smaller U.S. crossings.

The protest has inspired similar convoys and plans in France https://www.reuters.com/world/europe/french-freedom-convoys-head-towards-paris-police-checkpoints-2022-02-11, New Zealand, Australia and the United States, whose Department of Homeland Security is working to ensure that a “Freedom Convoy” event due in early March in Washington, D.C., “does not disrupt lawful trade.”

Biden’s administration had earlier urged Canada to use federal powers to ease the Ambassador Bridge blockade, a step Prime Minister Justin Trudeau’s government has not taken. Trudeau said on Friday his government was not contemplating calling in the military over the protests.

The leader of Ontario, where police have avoided using force to disperse protesters, sought to build pressure on Friday by threatening C$100,000 fines and up to a year in prison for non-compliance.

Announcing the penalties as part of emergency measures, Ontario Premier Doug Ford said they were needed to “make crystal clear it is illegal and punishable to block and impede the movement of goods, people and services along critical infrastructure.”

Ford said protesters had “attempted to disrupt our way of life by targeting our lifeline for food, fuel and goods across our borders,” and that they were “trying to force a political agenda through disruption, intimidation and chaos.”

It was not immediately clear if and when authorities would begin issuing fines or seeking jail sentences. A Canadian mayor whose city abuts the bridge sought a court injunction physically removed on Thursday to have the protesters removed.

With car production cuts mounting, Ford, the second-largest U.S. automaker, said on Friday it had temporarily halted work at its assembly plant in Ohio. It warned in a statement of a widespread impact on all automakers in both nations.

The stock of Canadian autoparts maker Magna International (NYSE:) fell 4.4% on Friday after it said it had seen an initial hit from the bridge’s closure.

Governor Gretchen Whitmer of Michigan, home to nearly a fifth of all U.S. car production, told CNN: “The Canadian government has to do whatever it takes to safely and swiftly resolve this.”

Trudeau says he is working with municipal leaders to end the blockade. His intergovernmental affairs minister, Dominic LeBlanc, said Canada has been “very engaged” with its U.S. partners over the crisis.

“Just because somebody doesn’t agree with a particular public-health measure doesn’t entitle them to damage hundreds of millions of dollars of cross-border trade, or create enormous disruption and abuse on the streets of the nation’s capital,” LeBlanc told reporters.