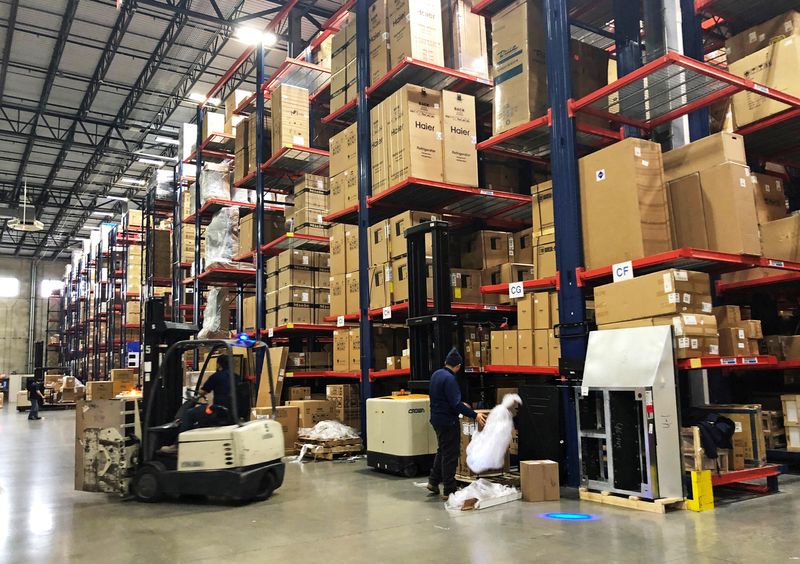 © Reuters. Warehouse workers deal with inventory stacked up to the ceiling at an ABT Electronics Facility in Glenview, Illinois, U.S. December 4, 2018. Picture taken December 4, 2018. To match Insight USA-RETAILERS/TRADE REUTERS/Richa Naidu

Business inventories rose 1.2% after gaining 0.8% in September, the Commerce Department said on Wednesday. Inventories are a key component of gross domestic product.

Retail inventories excluding autos, which go into the calculation of GDP, increased 0.5%, rather than 0.4% as estimated last month.

A moderate pace of inventory drawdown in the third quarter accounted for all of the 2.1% annualized rise in GDP last quarter. Inventories were depleted in the first half of the year, and COVID-19 pandemic-related shortages are making it difficult to rebuild stocks.

The urgent need to restock is keeping manufacturing humming and supporting the overall economy.

“Inventory-to-sales ratios have collapsed throughout the pandemic,” said Jonathan Golub, chief U.S. equity strategist at Credit Suisse (SIX:) Securities USA in New York. “While supply constraints have contributed to these declines, robust sales is the primary culprit. Inadequate inventories, and the need to replenish them, should support robust nominal GDP in 2022.”

There are concerns from some economists that businesses wary of delays getting stock could over-order and end up with excess inventory, which could put the economic expansion in jeopardy.

Business sales advanced 2.1% in October after rising 1.2% in September. At October’s sales pace, it would take 1.24 months for businesses to clear shelves, down from 1.26 months in September.