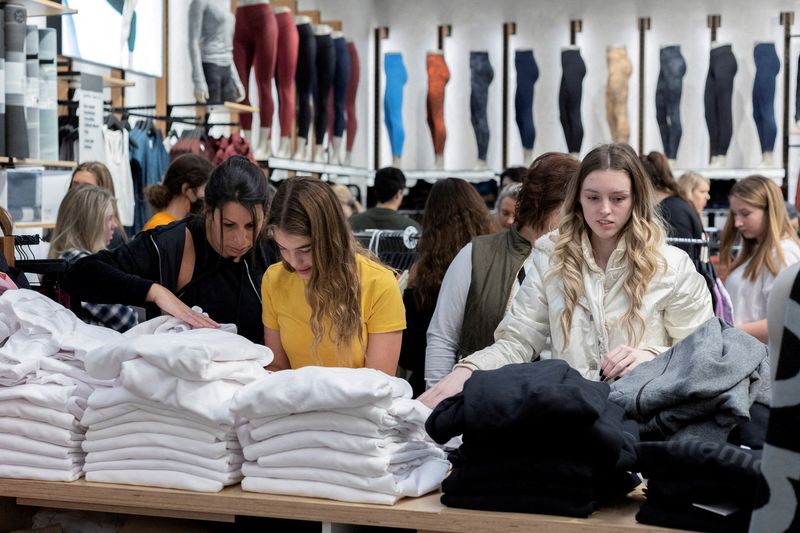 © Reuters. FILE PHOTO: U.S. consumer prices rose solidly in December, with the annual increase in inflation the largest in nearly four decades, Shoppers show up early for the Black Friday sales at the King of Prussia shopping mall in King of Prussia, Pennsylvania, U

WASHINGTON (Reuters) – U.S. consumer confidence ebbed slightly in January, with more consumers planning to purchase homes, automobiles and other big- ticket items even as they grew less optimistic about business and labor market conditions in the short term.

The survey from the Conference Board on Tuesday also showed consumers’ inflation expectations moderating for a second straight month, though still high. Labor market views softened a bit, likely reflecting the disruptions on businesses caused by the winter wave of COVID-19, fueled by the Omicron variant.

“While consumer confidence dipped this month, consumers generally have faith in the strength of this recovery,” said Robert Frick, corporate economist with Navy Federal Credit Union in Vienna, Virginia.

The Conference Board said its consumer confidence index slipped to a reading of 113.8 this month from 115.2 in December. Economists polled by Reuters had forecast the index falling to 111.8. Despite the first decline in four months, the index is well above pandemic lows.

The survey places more emphasis on the labor market, which is tightening amid worker shortages. The cutoff date for the survey was Jan. 19. The University of Michigan’s consumer sentiment index fell moderately in mid-January.

The Conference Board survey’s measure of current conditions rose, a sign that the economy entered 2022 on strong footing. Its gauge of expectations for growth in the short term eased in line with views that Omicron will slow economic growth this quarter.

The United States is reporting an average of 696,541 new coronavirus infections a day, according to a Reuters analysis of official data. Infections, however, appear to be subsiding in some regions, including the hardest-hit New York.

Against the backdrop of a stock market rout, some economists viewed the decline in short-term expectations as a warning sign.

Wall Street has come under intense selling pressure as investors fear aggressive interest rates increases by the Federal Reserve to tame inflation, as well as a possible Russian invasion of Ukraine.

U.S. stocks were lower, with the flirting with a correction for the second time this year. The dollar gained versus a basket of currencies. U.S. Treasury prices fell.

“We don’t remember consumer confidence remaining high for long historically when Wall Street is in a tailspin, said Christopher Rupkey, chief economist at FWDBONDS in New York. “Consumers already think business conditions will not be as positive six months from now before the stock market tumbled.”

The Conference Board’s so-called labor market differential, derived from data on respondents’ views on whether jobs are plentiful or hard to get, fell to a still-high reading of 43.8 this month from 44.2 in December.

Consumers’ inflation expectations over the next 12 months slipped to 6.8% from 6.9% last month. The retreat in inflation expectations from a 13-year high of 7.3% last November is likely to be welcomed by Fed officials who started a two-day policy meeting on Tuesday. The U.S. central bank is expected to start raising rates in March.

Despite high inflation, more consumer expected to buy homes, cars and other big-ticket items over the next six months.

The share of consumers planning to buy a motor vehicle was the largest in six months. Buying intentions for household appliances like television sets and refrigerators also rose, but plans to purchase washing machines and clothes dryers fell.

Consumers were more keen to buy a house over the next six months, with the share the largest in the current series. There was a break in the series in November 2010.

With housing supply continuing to lag demand, that suggests home prices will likely remain elevated this year. A second report on Tuesday showed the S&P CoreLogic Case-Shiller’s 20 metropolitan area home price index rose 18.3% on a year-on-year basis in November after accelerating 18.5% in October.

More than half of the 20 markets, including Florida as well as other metropolitan areas in the Southeast and Southwest regions reported strong price growth in November.

“Additionally, higher-tier price ranges have remained relatively more resistant to economic forces, mortgage rates and COVID-19-related demand changes and continue to be magnet markets for many buyers,” said Selma Hepp, deputy chief economist at CoreLogic. “Given that these areas have also had the relatively largest gains in in-migration, pressure on prices has persisted and will likely remain over the coming year.”

A survey from real estate brokerage Redfin (NASDAQ:).com showed 31.2% of the platform’s users looked to move to a different metropolitan area in the fourth quarter. The popular destinations were Miami, Phoenix, Las Vegas, Sacramento and Tampa, viewed as affordable areas.

Strong house price inflation was mirrored by a fourth report from the Federal Housing Finance Agency showing house prices increased 17.5% in the 12 months through November after rising 17.4% in October.