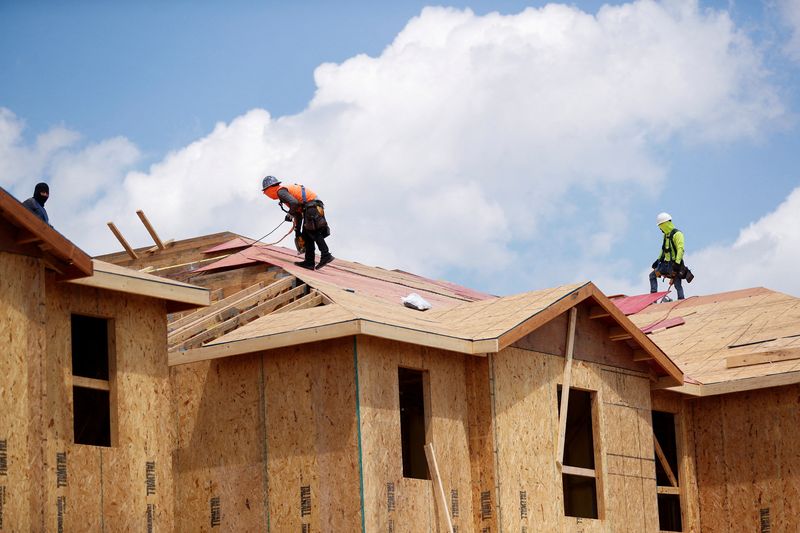 © Reuters. FILE PHOTO: Carpenters work on building new townhomes that are still under construction while building material supplies are in high demand in Tampa, Florida, U.S., May 5, 2021. REUTERS/Octavio Jones/File Photo

WASHINGTON(Reuters) – U.S. home sales unexpectedly increased in January, but investors paying in cash are squeezing out first-time buyers from the housing market amid record low inventory and higher prices.

The surge in sales of previously owned homes last month reported by the National Association of Realtors on Friday also reflected buyers rushing in to close contracts in anticipation of mortgage rates rising further. Investors made up the largest share of transactions in six years last month.

Mortgage rates have climbed to levels not seen since 2019 as the Federal Reserve is expected to start increasing interest rates next month to tame soaring inflation. Economists are anticipating as many as seven rate hikes this year.

“This is the rush to get in before borrowing costs move higher,” said Jennifer Lee, a senior economist at BMO Capital Markets in Toronto. “Unfortunately, first-timers are being priced out of the increasingly expensive purchase.”

Existing home sales jumped 6.7% to a seasonally adjusted annual rate of 6.50 million units last month. Sales rose in all four regions, with strong gains in the Midwest, the most affordable region. Sales soared 9.3% in the densely populated South, which is experiencing an influx of residents from other regions as companies embrace remote work.

Economists polled by Reuters had forecast sales decreasing 1.0% to a rate of 6.10 million units.

Home resales, which account for the bulk of U.S. home sales, fell 2.3% on a year-on-year basis.

Strong demand for housing against the backdrop of a strengthening labor market and massive savings is outstripping supply, curbing sales. Builders have been unable to significantly ramp up construction because of shortages and higher prices for inputs like softwood lumber for framing as well as cabinets, garage doors, countertops and appliances.

According to a report this week from the National Association of homebuilders, delivery of these products was taking “months,” raising construction costs and delaying projects. The Commerce Department reported on Thursday that the backlog of homes approved for construction but yet to be started raced to a record in January.

Stocks on Wall Street were trading lower amid building tensions in Ukraine. The dollar rose against a basket of currencies. U.S. Treasury prices were higher.

Tight supply is keeping house prices elevated. The median existing house price increased 15.4% from a year earlier to $350,300 in January. Sales remained concentrated in the higher price brackets, where houses are less scarce.

Sales of homes $250,000 and below, the much sought after price category, continued to decline.

First-time buyers accounted for 27% of sales last month, compared to 33% a year ago. Rising mortgage rates could make home buying even less affordable for this group.

Individual investors or second-home buyers, who make up many cash sales, bought 22% of homes. That was the largest share since October 2015 and was up from 15% a year ago. Investors are renovating, and either reselling or renting the homes to take advantage of the hot housing market. All-cash sales made up 27% of transactions compared to 19% last January.

There were a record-low 860,000 previously owned homes on the market last month, down 16.5% from a year ago. At January’s sales pace, it would take an all-time low 1.6 months to exhaust the current inventory, down from 1.9 months a year ago.

A six-to-seven-month supply is viewed as a healthy balance between supply and demand. In January, houses typically remained on the market for 19 days, down from 21 days a year ago.

Seventy-nine percent of homes sold last month were on the market for less than a month.

The 30-year fixed-rate mortgage averaged 3.92% in the week ending Feb 17, the highest since May 2019, according to data from mortgage finance agency Freddie Mac (OTC:). That was up from 3.69% in the prior week. Economists expect rising mortgage rates will contribute to slowing sales this year.