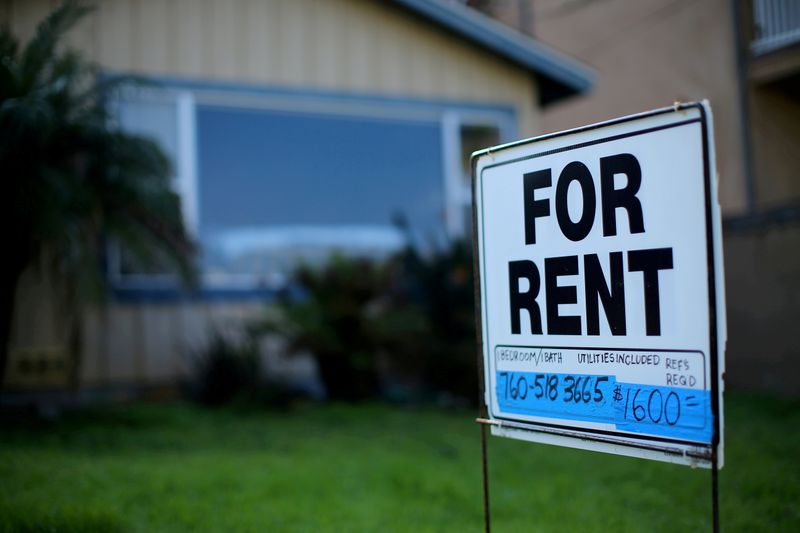 © Reuters. FILE PHOTO: A “For Rent” sign is posted outside a residential home in Carlsbad, California, U.S. on January 18, 2017. REUTERS/Mike Blake/File Photo

The report from the National Association of Realtors on Monday also showed an increase in the share of investors buying homes last month, likely reflecting growing demand for rental accommodation as the economy reverts to normal, thanks to vaccinations against COVID-19.

“Home sales remain resilient given the extremely tight supply of homes for sale,” said Shannon Brobst, an economist at Moody’s (NYSE:) Analytics in West Chester, Pennsylvania. “Potential home buyers will continue to find it challenging to find a home that meets their budget.”

Sales rose in the most affordable Midwest region and the densely populated South, but fell in the Northeast and were unchanged in the West, which is the most expensive region.

Home resales, which account for the bulk of U.S. home sales, dropped 5.8% on a year-on-year basis. The annual decline was, however, distorted by the surge in sales in October 2020.

Stocks on Wall Street were trading higher, with the and the Nasdaq hitting record highs after President Joe Biden picked Federal Reserve Chair Jerome Powell to lead the U.S. central bank for a second term. The dollar rose against a basket of currencies. U.S. Treasury prices fell.

Sales soared over the summer of last year amid an exodus from cities to suburbs and other low-density locations as Americans sought more spacious accommodations for home offices and online schooling during the pandemic.

With vaccinations allowing workers to return to offices and schools to reopen for in-person learning, the pandemic tailwind has subsided. Sales have declined from a peak 6.73 million unit-pace in October 2020, but demand for housing remains strong and continues to run against modest supply.

“While competition for homes has eased somewhat since the mania months earlier this year, competition is still fierce and prices are still rising at double-digit rates,” said Robert Frick, corporate economist at Navy Federal Credit Union in Vienna, Virginia. “The problem is especially acute for lower-income buyers given prices and home availability are still skewed toward higher-priced homes.”

Government data last week showed a sharp decline in single-family homebuilding in October and the largest backlog of houses yet to be constructed in 15 years because of shortages of materials and labor. That could boost housing inventory when the supply constraints ease.

At October’s sales pace, it would take 2.4 months to exhaust the current inventory, down from 2.5 months a year ago. A six-to-seven-month supply is viewed as a healthy balance between supply and demand.