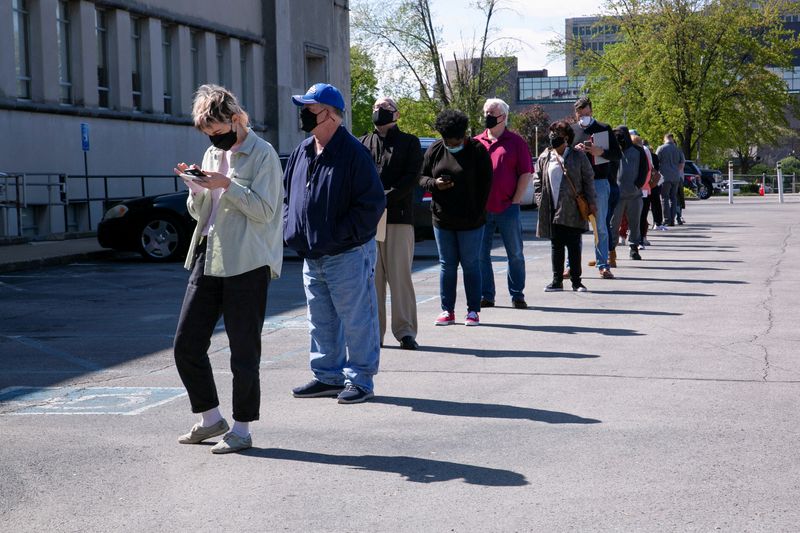 The second straight weekly decline reported by the Labor Department on Thursday partially unwound the recent surge, which had boosted initial claims to a three-month high in mid-January.

Claims increased from the beginning of January through the middle of the month amid an onslaught of coronavirus infections, driven by the Omicron variant. Business activity, especially in the services sector, was impacted by the latest wave.

A separate survey from the Institute for Supply Management on Thursday showed its non-manufacturing activity index fell to 59.9 last month, the lowest reading since February 2021, from 62.3 in December. A reading above 50 indicates growth in the services sector, which accounts for more than two-thirds of U.S. economic activity.

The ISM said the spread of the Omicron variant “has disrupted operations, especially through reduced staffing levels.” Services businesses also continued to grapple with erratic supplies of materials and higher input prices.

Labor supply constraints were highlighted by the ADP National Employment report https://www.reuters.com/world/us/us-private-payrolls-decrease-unexpectedly-january-adp-2022-02-02 on Wednesday, which showed private payrolls declined in January for the first time in a year, raising a strong possibility that the overall economy shed jobs last month.

According to the U.S. Census Bureau’s Household Pulse Survey published in mid-January, 8.8 million people reported not being at work because of coronavirus-related reasons between Dec. 29 and Jan. 10.

People who are out sick or in quarantine and do not get paid during the payrolls survey period are counted as unemployed in the Labor Department’s survey of establishments even if they still have a job with their companies.

Stocks on Wall Street were lower. The dollar fell against a basket of currencies. U.S. Treasury yields rose.

The government is likely to report on Friday that nonfarm payrolls increased by 150,000 jobs last month after rising by 199,000 in December, according to a Reuters survey of economists. Estimates range from a decrease of 400,000 to a gain of 385,000. The unemployment rate is forecast to be unchanged at 3.9%, underscoring tightening labor market conditions.

There were 10.9 million job openings at the end of December. The workforce is about 2 million people smaller than before the pandemic. Claims have dropped from a record high of 6.149 million in early April of 2020.

The recent labor market disruptions are likely over and job growth will probably pick up. The United States is reporting an average of 433,601 new COVID-19 infections a day, sharply down from the more than 700,000 in mid-January, according to a Reuters analysis of official data.

The claims report also showed the number of people receiving benefits after an initial week of aid dropped 44,000 to 1.628 million in the week ending Jan. 22.

A total of 2.068 million people were receiving unemployment checks under all programs in mid-January.

“The big drop in initial claims over the past two weeks and the ongoing decline in continued claims indicate that the job growth should bounce back in February,” said Gus Faucher, chief economist at PNC Financial (NYSE:) in Pittsburgh, Pennsylvania.

“The biggest constraint on hiring in the spring of 2022 will be a worker shortage.”

Underlying strength in the labor market was underscored by a separate report on Thursday from global outplacement firm Challenger, Gray & Christmas showing job cuts announced by U.S.-based employers held steady at 19,064 in January. Layoffs were down 76% compared to January 2021.

A third report from the Labor Department showed nonfarm productivity, which measures hourly output per worker, rebounded at a 6.6% annualized rate last quarter after falling at a 5.0% rate in the third quarter. Economists had expected productivity would rebound at a 3.2% rate. Productivity has been volatile since the pandemic started in the United States two years ago.