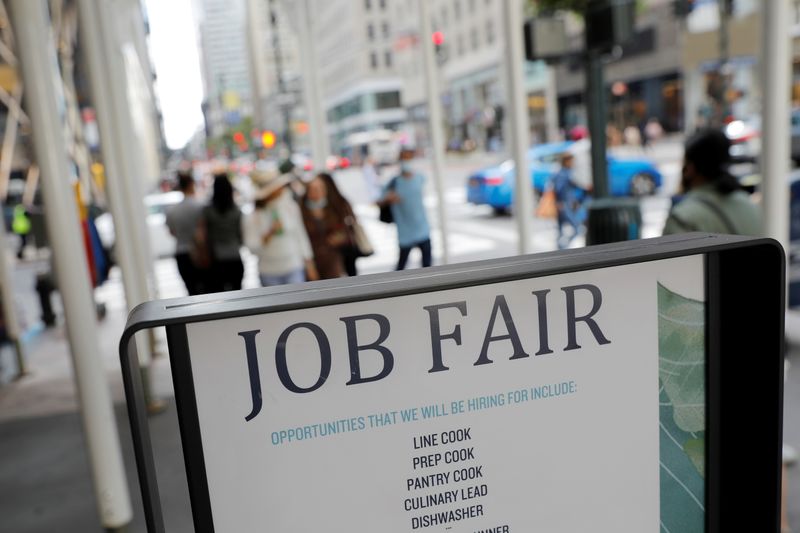 © Reuters. FILE PHOTO: Signage for a job fair is seen on 5th Avenue after the release of the jobs report in Manhattan, New York City, U.S., September 3, 2021. REUTERS/Andrew Kelly

WASHINGTON (Reuters) – The number of Americans filing new claims for unemployment benefits fell close to a 19-month low last week, further evidence that a shortage of workers was behind slower job growth rather than weakening demand for labor.

Initial claims for state unemployment benefits dropped 36,000 to a seasonally adjusted 293,000 for the week ended Oct. 9. That was lowest level since mid-March 2020. Economists polled by Reuters had forecast 316,000 claims for the latest week.

With the second straight weekly decline, claims are now in the upper-end of the 250,000-300,000 range that is viewed as consistent with a healthy labor market. Claims have dropped from a record high of 6.149 million in early April 2020.

The government reported last Friday that nonfarm payrolls increased by only 194,000 jobs in September, the fewest in nine months. The cooling in employment growth is mostly due to a dearth of workers as well as skills mismatch, with government data on Tuesday showing there were 10.4 million job openings at the end of August.

Labor shortages, caused by the COVID-19 pandemic, are also prevalent in other economies. With coronavirus infections driven by the Delta variant declining and schools fully reopened for in-person learning, there is hope that more Americans will rejoin the labor force.

The labor crunch could also ease in the months ahead following the expiration of federal government-funded benefits in early September. But amid increased self employment and massive savings as well as early retirements, thanks to a strong stock market and record house price gains, the labor pool could remain shallow for a while.

The scarcity of labor is choking up the supply chain because there are fewer workers to produce raw materials and goods as well as shipping them to markets, fanning inflation.

In another report on Thursday, the Labor Department said its producer price index for final demand increased 0.5% in September after advancing 0.7% in August. In the 12 months through September, the PPI accelerated 8.6%, the largest year-on-year advance since November 2010 when the series was revamped, after surging 8.3% in August.

Economists polled by Reuters had forecast the PPI gaining 0.6% on a monthly basis and increasing 8.7% year-on-year.

The report followed on the heels of news on Wednesday of a solid increase in consumer prices in September, driven by strong gains in food and rents as well as a range of other goods.

Minutes of the Federal Reserve’s Sept. 21-22 policy meeting published on Wednesday showed some U.S. central bank officials “expressed concerns that elevated rates of inflation could feed through into longer-term inflation expectations of households and businesses.”