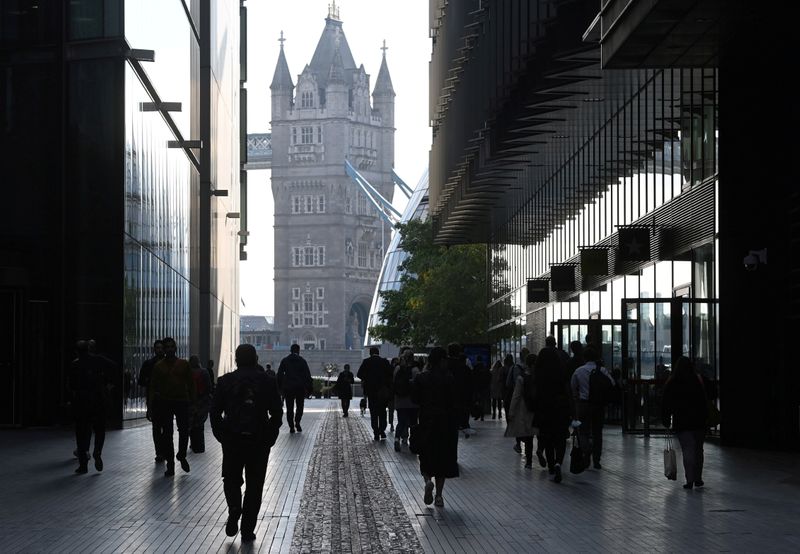 By William Schomberg and David Milliken

LONDON (Reuters) -Britain’s economy unexpectedly regained momentum in October, despite surging costs and mixed consumer signals, according to surveys on Friday that could tempt the Bank of England to raise interest rates for the first time since the pandemic.

The preliminary “flash” IHS Markit/CIPS Composite Purchasing Managers’ Index rose by the largest amount since May to hit 56.8, up from 54.9 in September. By contrast, a Reuters poll of economists had pointed to a further slowdown to 54.0.

Sterling rose to the day’s high so far against the dollar after the data, which contrasted with earlier figures showing a record fifth straight monthly fall in retail sales in September, despite panic-buying of petrol late in the month.

However, IHS Markit’s chief business economist, Chris Williamson, said the unexpected rebound in the PMI should not be viewed as a green light for the BoE to raise rates on Nov. 4.

“The service sector is clearly in something of a sweet spot,” he said. “Rising COVID-19 case numbers pose a downside risk to growth in the coming months, potentially deterring some services-oriented activity … and potentially leading to the renewed enforcement of health restrictions as winter draws in.”

Market researchers GfK said households this month were the gloomiest since the last lockdown in February, due to higher prices, shortages in shops and petrol stations and a big increase in the number of coronavirus cases.

Britain reported more than 52,000 new COVID-19 cases on Thursday alone, the highest since a wave of the Delta variant in July and more than anywhere else in Europe.

IHS Markit said the rise in the PMI was driven by Britain’s services firms as consumers and businesses spent more due to the rollback of pandemic restrictions. Travel firms in particular benefited from a relaxation of COVID-19 testing rules.

By contrast, retailers – who are not covered in Britain’s PMI – have seen sales fall non-stop since a record high in April as supply-chain difficulties worsened and spending options widened as pubs, restaurants and hotels reopened.

Service sector activity outpaced manufacturing output by the widest margin since 2009 as factories struggled again with shortages of supplies and staff and recorded barely any growth.

The PMI for the services sector rose to 58.0, its highest in three months, while the manufacturing PMI’s output component sank to its lowest since February at 50.6.

Higher wages and the worsening supply shortages resulted in the fastest increase in average costs since the combined composite index was launched in January 1998. Separate PMIs for the services and manufacturing sectors showed prices charged by firms rose by the most since these individual series began more than 25 years ago.

With inflation set to hit more than double its 2% target soon, the BoE is expected to raise borrowing costs soon as it tries to make sure that rising inflation expectations do not become embedded in British businesses’ pricing decisions.

The Bank of England’s new chief economist, Huw Pill, said in an interview published late on Thursday that the question of raising interest rates was “live” for the central bank’s November meeting, and that he would not be surprised to see inflation exceed 5% early next year.

The Confederation of British Industry said on Thursday that manufacturers were raising prices by the most since 1980 in the face of some of the biggest increases in costs and labour shortages since the 1970s.

September’s retail sales data showed the biggest increase in prices since December 2011, and GfK said a record proportion of the public expected inflation to accelerate over the next 12 months.

But many economists think the BoE would still do better to wait until Britain’s economy has returned to its pre-pandemic size before raising rates, especially as finance minister Rishi Sunak is expected to set out tighter budget rules next week.

“The risk is that by tightening monetary policy too quickly, some of the temporary economic damage from the pandemic becomes permanent,” said Thomas Pugh, an economist at accountants RSM UK.