The US has overtaken the EU as the leading destination for UK financial services exports after trade with the bloc dropped last year following Brexit.

Financial services exports to the EU fell 6.6 per cent to £24.7bn in 2020, according to a report from TheCityUK, the sector’s lobby group, across a range of sectors from banking to insurance.

However, exports to non-EU countries rose 4.1 per cent to £57.7bn in the same period, according to TheCityUK, within which exports to the US increased 5.3 per cent. This meant that the US accounted for 34.2 per cent of sector exports in 2020, while those to the EU fell to 30 per cent, roughly reversing the position from the previous year.

The total value of UK financial services exports remained stable in 2020, at £82.4bn despite the upheaval of the coronavirus pandemic as global markets rebounded strongly in the second half of the year.

The EU and UK failed to strike an equivalence deal for financial services, which would have allowed banks, insurers, law firms and accountants to work freely across borders after the UK left the bloc at the start of 2020.

Although the UK and EU signed a memorandum of understanding on financial services, officials said progress has since been slow on striking any deal.

David Frost, UK Brexit minister, told a dinner held by headhunters Odgers Berndtson last month that the UK was “unlikely to get extensive equivalence [on financial services] from the EU in the next year or two”. He added that the government policy was now “to work on that assumption”.

The slowdown in UK trade with the EU has been countered by a rise in exports to other countries, however. In 2020, the year following Brexit and the start of the Covid-19 pandemic, total UK financial and professional services trade surplus increased to £79.3bn, according to the TheCityUK report, from £73.5bn in 2019.

Financial services were generally more resilient during the pandemic, which hit supply chains and global trade in goods, according to TheCityUK.

Anjalika Bardalai, chief economist at TheCityUK, said that “if the UK does not keep pace . . . other centres will continue to vie to attract business”.

She added: “The UK’s status as a world-leading financial centre is at risk unless industry, government and regulators work together to boost long-term competitiveness, deepen key trade links and focus on new areas of future global growth.” 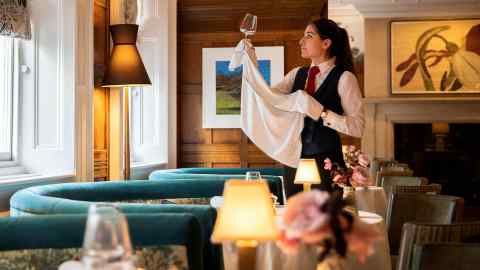 UK banking sector assets totalled £10.3tn at the end of the first half of 2021, the third-largest in the world and the largest of any country in Europe, while the UK has the biggest legal services and insurance markets in the region.

London had 352 foreign companies listed on the stock exchange in September 2021. During the first 10 months of 2021, the UK initial public offering market saw a resurgence in activity, with 93 companies raising capital through new issues and IPOs equivalent to £5.9bn.

The government hopes to boost further flotations by relaxing rules around stock market listings from this month, given criticism that countries including the US are more attractive to fast-growing, tech-focused businesses.

For the latest news and views on fintech from the FT’s network of correspondents around the world, sign up to our weekly newsletter #fintechFT