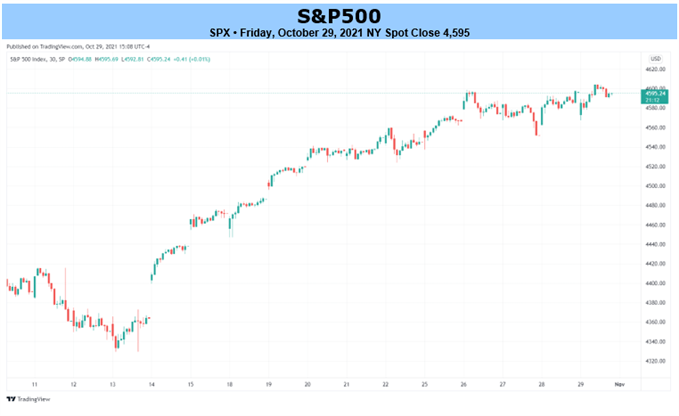 The Federal Reserve interest rate decision on November 3 may influence the US stock market as the central bank prepares to scale back monetary support.

The US stock market remains afloat ahead of the Federal Open Market Committee (FOMC) meeting, with equity indices like the S&P500 trading to fresh yearly highs in October even though the 3Q Gross Domestic Product (GDP) report points to a less robust recovery.

It remains to be seen if the FOMC will delay its exit strategy as the slowdown in economic activity is met with signs of sticky inflation, and more of the same from Chairman Jerome Powell and Co. may boost investor confidence if the central bank stays on track to “increase its holdings of Treasury securities by at least $80 billion per month and of agency mortgage‑backed securities by at least $40 billion per month.”

However, the mixed data prints may do little to derail the FOMC from scaling back monetary support as the minutes from the September meeting emphasize that “the labor market had continued to show improvement since the Committee’s previous meeting,” with Fed officials generally assessing that, “provided that the economic recovery remained broadly on track, a gradual tapering process that concluded around the middle of next year would likely be appropriate.”

As a result, a reduction in the Fed’s quantitative easing (QE) program may drag on investor sentiment as “the process of tapering could commence with the monthly purchase calendars beginning in either mid-November or mid-December,” but US stock prices may continue to exhibit a bullish trend throughout the remainder of the year as the gradually approach in winding down the emergency tool “would lead the Federal Reserve to end purchases around the middle of next year.”

With that said, a shift in Fed policy may rein in risk-taking behavior as the central bank looks to conclude its easing cycle over the coming months, but US stock prices may continue to push to fresh yearly highs as the FOMC appears to be on a preset course in withdrawing monetary support.