Joe Biden has threatened to impose sanctions on Myanmar after the military seized power in a coup and detained Aung San Suu Kyi and other leaders of the country’s ruling National League for Democracy party.

The US president described the coup as a “direct assault on the country’s transition to democracy” and warned Myanmar’s military that his administration was preparing to take action to respond to their illegal seizure of power.

“The US removed sanctions on Burma over the past decade based on progress toward democracy,” Mr Biden said in a statement, using the former name of Myanmar.

“The reversal of that progress will necessitate an immediate review of our sanction laws and authorities, followed by appropriate action,” he added.

Myanmar’s military on Monday said it had seized control after the arrest of senior NLD leaders, including Aung San Suu Kyi, who is the state counsellor, and President Win Myint. It imposed a state of emergency for a year, and handed power to General Min Aung Hlaing, its commander-in-chief.

Mr Biden called on the international community to press the military “to immediately relinquish the power they have seized” and to release the detained officials. He also urged them to lift restrictions on the internet and other telecommunications that were imposed in connection with the coup.

Mr Biden said he was “taking note of those who stand with the people of Burma in this difficult hour”.

Asked if he was referring to China, Jen Psaki, White House press secretary, said it was “a message to all countries in the region”. She said the US was having “extensive consultations” with allies as it evaluated its response.

The generals later appeared to walk away from the threat, saying they would abide by the constitution. But on Monday morning, the military carried out the previously-threatened coup by arresting Ms Aung San Suu Kyi and other senior NLD officials just hours before the newly elected parliament was scheduled to meet for the first time.

The coup resurrected memories of the five-decade military junta rule and the previous detention of Ms Aung San Suu Kyi, who spent years under house arrest as a political prisoner. 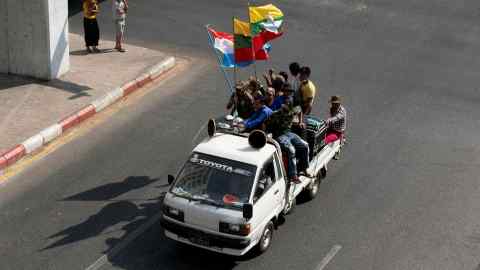 The NLD assumed power in 2016 after an election held under the auspices of a 2008 constitution that reserved three government ministries and one quarter of the parliamentary seats for the military. The transfer of power to a civilian government paved the way for the US to remove sanctions in place during the military regime.

The coup sparked condemnation from across the world. Josep Borrell, EU foreign policy chief, said he “strongly” condemned the coup and called for the immediate release of the NLD officials. “Myanmar’s people want democracy. The EU stands with them,” he tweeted.

António Guterres, UN secretary-general, said he “strongly condemned” the coup. Marise Payne, the Australian foreign minister, said Canberra was “deeply concerned” and the UK called on the military to “respect the rule of law and human rights, and release those unlawfully detained”.