Joe Biden will order a review of US treatment of asylum seekers from Central and South America and set up a new task force to reunite children and parents separated at the border as he continues efforts to overhaul the US immigration system.

New executive orders to be signed by Mr Biden at the White House on Tuesday continue the president’s push to unravel many of Donald Trump’s immigration restrictions without needing to pass what will probably be a polarising bill on immigration reform through a narrowly divided Congress.

The orders will establish a new task force to review barriers to legal immigrants gaining US citizenship, and another to reunite children and parents separated when crossing into the US across the southern border with Mexico.

The administration will also review rules known as the Migrant Protection Protocols, which currently require thousands of asylum seekers to wait in Mexico for their claims to be processed, and work to “address the root causes of migration from Central America”, a senior administration official said.

“President Biden’s strategy is centred on the basic premise that our country is safe and stronger and more prosperous, with a safe, orderly and humane immigration system that welcomes immigrants, keeps families together, and allows people of newly arrived immigrants and people who have lived here for generations to more fully contribute to our country,” an official said.

Mr Biden has already made several executive orders undoing many of Mr Trump’s rules cracking down on legal and illegal immigration, including halting construction work on the former president’s signature border wall, lifting his travel ban on people from predominantly Muslim countries and reversing plans to exclude non-citizens from the 2020 census.

The Department of Homeland Security has also issued a 100-day pause on deportations “for certain non-citizens”, although the order has been temporarily blocked by a federal judge in Texas.

But despite the wave of executive orders, Mr Biden faces a battle to pass further reforms through Congress. On his first day as president he outlined a comprehensive reform bill to be sent to lawmakers, including provisions to grant a path to citizenship for about 11m undocumented migrants.

While New Jersey senator Bob Menendez is working on introducing Mr Biden’s bill to the Senate floor, other Democrats are working on smaller immigration bills that they hope could achieve bipartisan support. 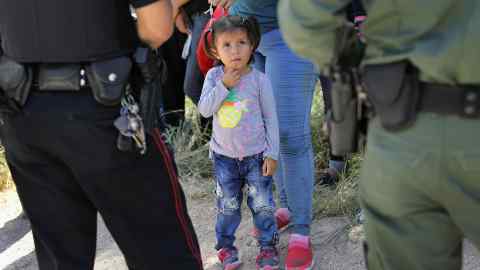 Dick Durbin, the incoming chair of the Senate judiciary committee, and Lindsey Graham, the committee’s top Republican, plan to introduce a new version of the Dream Act, which would offer amnesty for migrants brought to the US illegally as children.

Although Mr Biden’s early immigration efforts have focused on humanitarian issues, including treatment of asylum seekers and undocumented migrants, administration officials said “a lot” of Mr Trump’s other policies — including bans and suspensions of worker visas — would continue to be under review.

Mr Trump was criticised by American businesses last year for issuing a ban on new green cards and suspending a range of work visas allowing everyone from scientists and engineers to au pairs to work in the US.

The Trump administration also made efforts to eject international students from US universities if their courses moved fully online because of coronavirus, but the proposal was overturned in court following a lawsuit from Harvard University and the Massachusetts Institute of Technology.