The US unemployment rate dropped significantly in December, despite unexpectedly slow jobs growth ahead of the surge in Covid-19 cases linked to the Omicron coronavirus variant.

Employers added only 199,000 jobs last month, a decline from the upwardly revised 249,000 positions created in November and well short of the 444,000 expected by economists. With December’s gains, monthly job growth averaged 537,000 in 2021, but there are still 3.6m fewer jobs than before the pandemic hit.

The unemployment rate posted another sizeable drop, decreasing 0.3 percentage points to 3.9 per cent, a move that is likely to keep the Federal Reserve on track to more rapidly withdraw its stimulus from a recovering economy.

Despite the headline miss, strong internal data throughout the report — including the better than expected average hourly earnings and drop in the unemployment rate — helped strengthen the view that the US economy and labour market remained on solid footing and that high inflation risks becoming persistent. That, investors believe, will give the US central bank the leeway it needs to withdraw crisis-era stimulus.

The data, released by the Bureau of Labor Statistics on Friday, also showed another marginal improvement in the share of people employed or looking for a job.

Concerns about Covid and childcare issues are chiefly to blame for holding back a more substantial return to work, keeping the so-called labour force participation rate below where economists anticipated it would be at this stage of the recovery.

It inched higher to 61.9 per cent in December, up from 61.8 per cent in November but still more than 1 percentage point shy of the pre-pandemic threshold.

Average hourly earnings growth increased 0.6 per cent from the previous month, for an annual gain of 4.7 per cent.

The figures added fuel to a sell-off in the Treasury market that has reverberated across global financial markets, with yields on the benchmark 10-year US government note rising 0.03 percentage points to 1.75 per cent. Yields rise when a bond’s price falls.

The 10-year yield has posted its biggest weekly rise in 19 months over the past five trading days. Selling buffeted Treasuries across the yield curve, with yields on the five-year climbing to 1.5 per cent, the highest since January 2020.

US equities, which have been under pressure as bond yields have climbed, fluctuated at the start of trading in New York on Friday. The tech-heavy Nasdaq Composite briefly fell as much as 0.3 per cent before rebounding to trade higher.

December’s figures mirrored jobs data in November that showed only modest improvements in the payroll figures, which are derived from the so-called establishment survey from employers. The survey focusing on households, used to calculate the unemployment rate, indicated more substantive gains.

Reporting lags and distortions from seasonal rhythms that are typically factored into initial estimates have complicated the US government’s ability to measure jobs growth in 2021, leading to the largest upward revisions to the numbers in history.

US central bank officials have been waiting to see further improvement in the labour market before proceeding with plans to raise interest rates in the face of extremely high inflation.

Traders ramped up bets on Friday of how quickly the Fed would increase interest rates this year, with futures markets also signalling tighter policy in the years ahead.

The Fed has said it would delay “lift-off” of its main policy rate from its ultra-low levels until it achieves inflation that averages 2 per cent over time and maximum employment.

Top officials saw the first goal as “more than met”, according to minutes from the December policy meeting, and “rapid” progress towards the second. Several members of the Federal Open Market Committee and regional branch presidents said labour market conditions were “already largely consistent” with maximum employment. 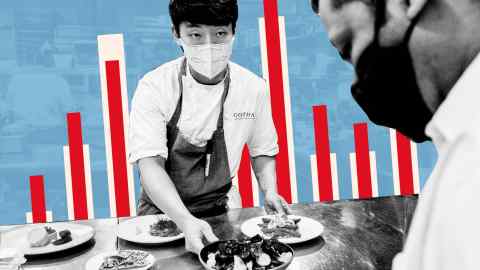 Some even speculated whether it would be appropriate to raise interest rates before maximum employment is achieved, especially if price stability concerns grow more acute.

Christopher Waller, a Fed governor, and James Bullard, president of the St Louis Fed, are among those who support an interest rate increase in March, with additional adjustments appropriate later in the year. Most Fed officials see three rate rises in 2022 and another five by the end of 2024.

The economy might also be in a strong enough position for the Fed to begin scaling back the size of its enormous balance sheet after the first interest rate adjustment, the minutes indicated, another substantive step to remove accommodation.

The decision stems directly from a sharp acceleration in inflation, which now hovers at the highest level in roughly 40 years. Jay Powell, the Fed chair, recently said the central bank was watching wage growth closely for further evidence that inflation could morph into a more persistent problem.

Jobs gains picked up in the leisure and hospitality industry in December, with 53,000 positions created, as well as in professional and business services. Nearly 30,000 manufacturing jobs were added, with additional gains in construction and warehousing, the BLS data showed.

The number of retail-related jobs, and those for the healthcare industry and across government, showed little change.