USD/CAD appreciates for the fourth consecutive day after retracing the decline following the larger-than-expected increase in Canada’s Consumer Price Index (CPI), but the exchange rate may continue to trade within a defined range as it struggles to clear the monthly high (1.2788).

USD/CAD pulls back from a fresh weekly high (1.2873) even as US President Joe Biden announces the “first tranche” of sanctions against Russia by targeting two large financial institutions and Russian sovereign debt, and the exchange rate may continue give back the advance from last week as it preserves the February range.

However, fresh data prints coming out of the US may sway USD/CAD as the Personal Consumption Expenditure (PCE) Price Index is expected to increase for the fifth consecutive month, with the Federal Reserve’s preferred gauge for inflation seen widening to 5.1% from 4.9% per annum in December, which would mark the highest reading since 1983.

Evidence of higher inflation may generate a bullish reaction in the US Dollar as it fuels speculation for an imminent shift in Fed policy, and USD/CAD may stage further attempts to breakout of the February range as Chairman Jerome Powell and Co. appear to be on track to winddown the balance sheet starting later this year.

In turn, fresh data prints coming out of the US may keep USD/CAD afloat ahead of the Fed rate decision on March 16 as market participants brace for a material change in regime, and the tilt in retail sentiment looks poised to persist as traders have been net-long the pair since late-December. 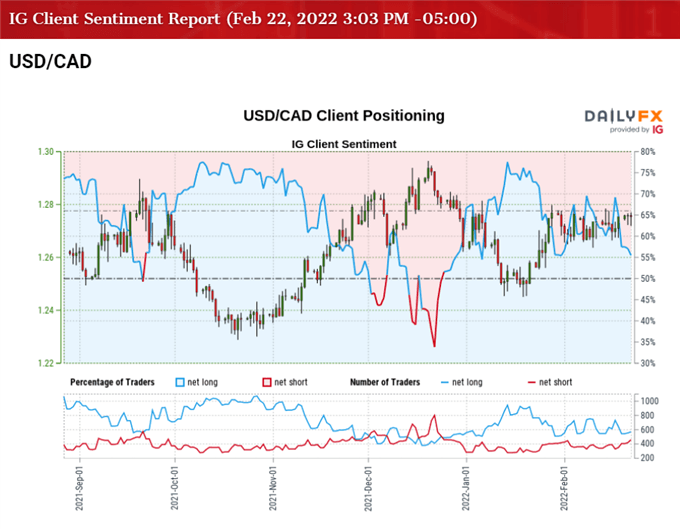 The IG Client Sentiment report shows 61.13% of traders are currently net-long USD/CAD, with the ratio of traders long to short standing at 1.57 to 1.

The number of traders net-long is 8.11% higher than yesterday and 11.30% higher from last week, while the number of traders net-short is 11.33% lower than yesterday and 1.93% lower from last week. The rise in net-long interest has fueled the crowding behavior as 59.41% of traders were net-long USD/CAD last week, while the decline in net-short position comes as the exchange rate appreciates for the fourth consecutive day.

With that said, USD/CAD may trade within a defined range ahead of March amid the failed attempts to clear the monthly high (1.2788), but the update to the US PCE Price Index may keep the exchange rate afloat as it puts pressure on the Federal Open Market Committee (FOMC) to normalize monetary policy sooner rather than later. 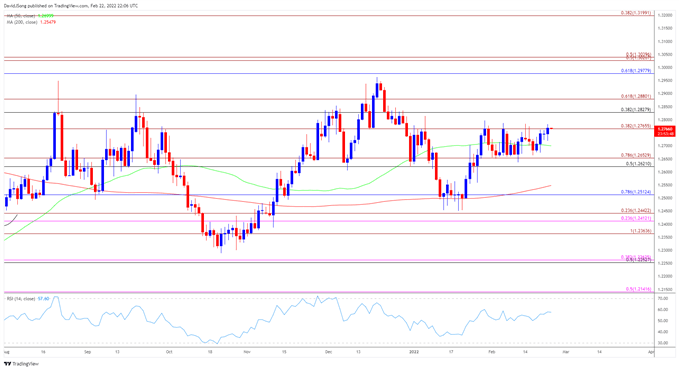