A slew of Chinese economic data crossed the wires today as markets await the Federal Reserve rate decision tonight. The market was largely unfazed after the data crossed the wires, with traders likely remaining cautious going into tonight’s FOMC announcement. The Australian Dollar and Chinese Yuan remained slightly stronger against the US Dollar.

China’s house price index for November fell to 3.0% from 3.4% amid the country’s ongoing property sector woes. That was the fifth consecutive monthly slowdown for price growth. Retail sales for November also weakened, with the year-over-year figure dropping to 3.9% from 4.9%, according to the National Bureau of Statistics (NBS). That was well below the 4.6% consensus forecast.

Industrial production for November crossed the wires at 3.8%, beating analysts’ expectations at 3.6% and rising from October’s 3.5% figure. Iron ore prices have risen for the last five weeks on signs that China’s steel output was increasing. Mysteel research firm released a note last month forecasting an increase in pig iron output for December after nearly two dozen blast furnaces in the country were brought back online.

Overall, the data dump represents a rather gloomy picture for the Chinese economy. Local and regional travel restrictions due to Covid flare-ups have pressured consumer demand. Earlier this week, China’s CDC identified the first Omicron infection in the province of Zhejiang, a northern port city. Zhejiang is a key manufacturing region, which could dull the recovery in industrial production. Later today, China will report foreign direct investment (FDI) data for November.

USD/CNH is holding onto a weekly gain after prices fell to the lowest point since May 2018 last week. Prices have been under pressure since October when triangle support broke. The falling 26-day Exponential Moving Average has since capped upside movements. Bears may attempt breaking into new lows in the coming days. Alternatively, if USD bulls can break above the EMA, it could lead to post-triangle losses being restored. 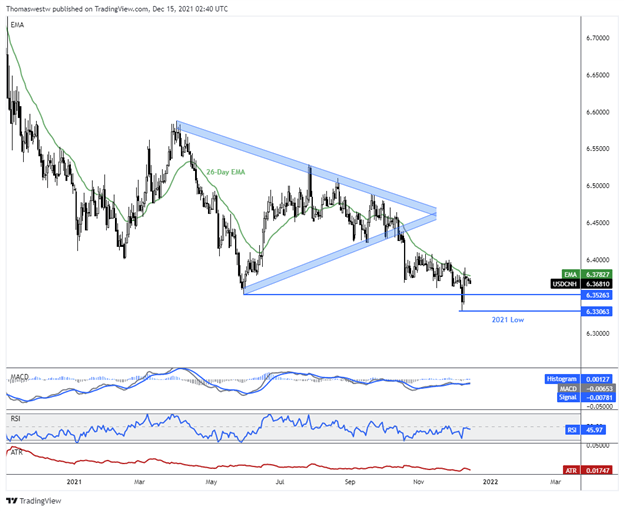