The World Trade Organization has postponed its biennial ministerial meeting after Switzerland tightened travel restrictions to control the new Omicron variant of coronavirus.

The decision was made at an emergency meeting of ambassadors in Geneva on Friday.

The meeting was due to begin on Monday but Switzerland banned travel from southern Africa and said that people from Belgium and Israel, where cases have been detected, would have to quarantine for 10 days. That ruled out most of the EU delegation from travelling.

Dacio Castillo, the Honduran chair of the body’s general council, said: “Given these unfortunate developments and the uncertainty that they cause, we see no alternative but to propose to postpone the ministerial conference and reconvene it as soon as possible when conditions allow.” No date has been set.

“This has not been an easy recommendation to make . . . But as director-general, my priority is the health and safety of all MC12 participants — ministers, delegates and civil society. It is better to err on the side of caution,” she said.

“This does not mean that negotiations should stop. On the contrary, delegations in Geneva should be fully empowered to close as many gaps as possible. This new variant reminds us once again of the urgency of the work we are charged with,” she said.

One key aim of the meeting was to improve the availability of vaccines in the developing world. 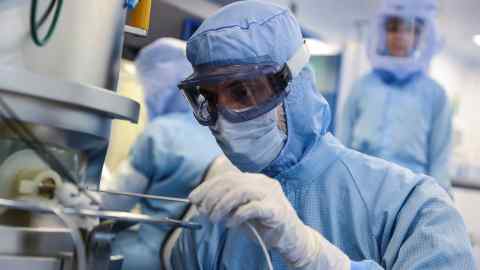 But developed countries including the EU, UK and Switzerland have opposed such a sweeping move. The EU has attempted a compromise by offering to loosen rules on compulsory licensing.

That would allow governments to instruct generic manufacturers to make drugs domestically with minimal compensation for the pharmaceutical companies that invented them.

Ngozi Okonjo-Iweala, WTO director-general, said on Thursday that the IP talks were “stuck”.

However, countries will try to conclude a deal to protect fish stocks by ending subsidies for deep-sea fishing. India and some EU countries were still resisting but WTO officials believed that a deal could be thrashed out after 20 years of talks.

The news is a blow to the 164-member body. It cannot fulfil one of its main functions, to adjudicate trade disputes, because the US is refusing to nominate panellists to its appellate body. Ministers were expected to begin a debate on WTO reform.

It is the second postponement on health grounds. The meeting was first scheduled for June 2020 in Kazakhstan.