A combination of factors capped the commodity’s early uptick to the $1845 region.
A goodish pickup in the USD demand exerted some downward pressure on the metal.
The technical set-up favours bearish traders and supports prospects for further decline.

Gold seesawed between tepid gains/minor losses through the early European session and consolidated the overnight slide to over two-week lows.

The underlying bullish sentiment weighed on the safe-haven XAU/USD and kept a lid on the early uptick to the $1845 region. Apart from this, a modest uptick in the US Treasury bond yields prompted some selling around the non-yielding yellow metal.

This, along with resurgent US dollar demand, exerted some additional pressure on the dollar-denominated commodity. The USD stood tall following the release of better-than-expected ADP report on the US private-sector employment.

Meanwhile, the recent rejection slide from $1875-76 supply zone dragged the yellow metal below a short-term ascending trend-line support on Tuesday. This, in turn, might have already set the stage for a further near-term depreciating move.

The negative outlook is further reinforced by bearish technical indicators on hourly/daily charts. A subsequent slide below the overnight swing lows, around the $1830 region, will reaffirm the bearish bias and prompt some technical selling.

The XAU/USD might then accelerate the downfall towards intermediate support near the $1818-17 region. The downward momentum could further get extended and allow bears to aim back to challenge 2021 swing lows, around the $1800 round-figure mark.

On the flip side, attempted recovery might now confront stiff resistance near the $1853-54 horizontal zone. Any further positive move would now be seen as a selling opportunity and runs the risk of fizzling out near the $1870-75 congestion zone. 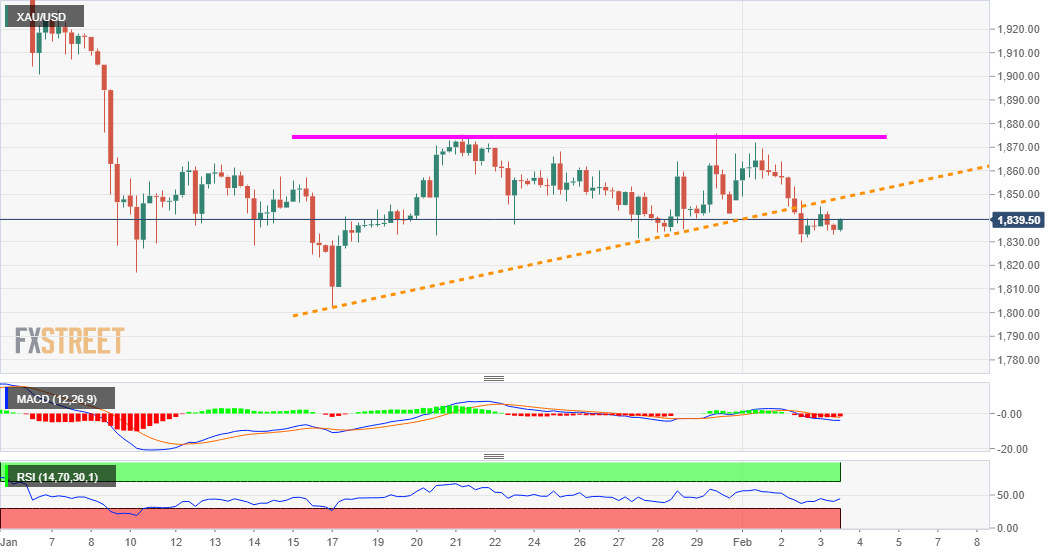